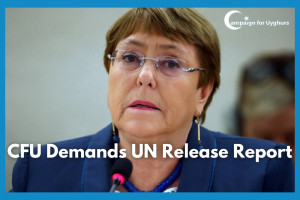 Campaign for Uyghurs (CFU) calls for the release of the Office of the High Commissioner for Human Rights (OHCHR) report on human rights violations by the Chinese Communist Party (CCP) on Uyghurs. The Chinese government is asking the United Nations human rights chief Michelle Bachelet to bury the highly-anticipated report, as reported by Reuters on July 19th. The letter authored by China expressed “grave concern” about the report, and aims to stop its release by lobbying among diplomatic missions in Geneva to galvanize support and influence the human rights chief to adhere to China’s calls.

CFU has called on Bachelet to release her report on several occasions and even joined a coalition of 230 organizations demanding the UN High Commissioner for Human Rights’ resign from her post. The timing is significant, as Xi Jinping’s visit to East Turkistan last week signals a renewed and continued effort to eradicate the Uyghurs through Xi’s genocidal-assimilation policy. According to the CCP, as a result of last week’s visit, Beijing has reaffirmed its policies. The message Xi is sending is Beijing’s red lines cannot be crossed and that no one can interfere with Chinese internal policy.

Xi has said that “Every ethnic group in Xinjiang is an inseparable member of the great family of Chinese nationhood,” an indication that what is being carried out in East Turkistan is an eradication campaign as highlighted in the recent “Xinjiang Police Files,” brought to light by the Victims of Communism Memorial Foundation’s Senior Fellow Dr. Adrian Zenz. An eradication program that has seen many other civilizations disappear under China’s oppression.

Executive Director Rushan Abbas said, “It is not the first time China is trying to drum up support for its genocide, nor will it be the last. The question is whether countries will succumb to China’s whims because of economic ties, and if Michelle Bachelet will once again be coaxed into listening to China’s demands. This report, if released and prepared truthfully without China’s manipulations, can influence decisions at the Human Rights Council, and can authorize investigations into China’s atrocities.”

CFU once again demands accountability from Michelle Bachelet and the Human Rights Council for the Chinese regime’s use of forced labor, as well as its ongoing genocide and crimes against humanity against Uyghurs and Turkic groups in East Turkistan. The 47-member state Human Rights Council must advance the rights of marginalized ethnic and religious groups like the Uyghurs through continued engagement with Uyghur advocacy organizations. This step is critical in order to be informed about the true nature of this genocide so as not to be manipulated by China’s persistent disinformation and propaganda.