Read the full letter below, or click the link to view the PDF: 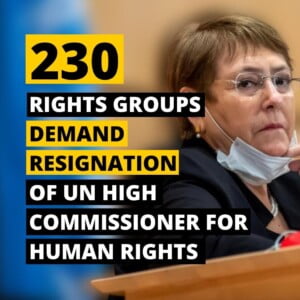 We, over 230 Uyghur, Tibetan, Southern Mongolian, Hong Kong, and Chinese democracy and international human rights advocacy groups, call for the immediate resignation of the United Nations High Commissioner for Human Rights after she whitewashed the Chinese government’s human rights atrocities during her recent visit to China. We further call on the UN Secretary General to not propose the renewal of her mandate [1] and demand the High Commissioner immediately release the report on the human rights violations against Uyghurs and other Turkic communities in East Turkistan [Ch: Xinjiang Uyghur Autonomous Region].

During her six-day visit to China, the first by a High Commissioner since 2005, Michelle Bachelet squandered a rare opportunity to promote accountability by failing to address the litany of systematic human rights violations committed by the Chinese authorities. This includes genocide and crimes against humanity in East Turkistan. Bachelet also neglected to offer a single specific recommendation to address the gravity of the human rights crisis [2]. This abject failure to hold the Chinese government accountable for its crimes comes despite an unprecedented call in June 2020, by over 50 UN experts for “decisive measures” to protect fundamental freedoms in China [3].

The High Commissioner legitimized Beijing’s attempt to cover up its crimes by using the Chinese government’s false “counter-terrorism” framing [4] and repeatedly referred to the notorious internment camps by the Chinese government’s term: “Vocational Education and Training Centers” (VETCs). Just days prior, the ‘Xinjiang Police Files’ revealed further incriminating evidence of the mass internment of thousands of Uyghurs and Directives from Beijing to treat detainees like dangerous criminals and to open fire to stop escapees [5]. While world leaders responded by calling for an immediate investigation, Bachelet remained silent. Since 2021, the High Commissioner has also stalled on the commitment to release a report on the human rights violations against Uyghurs and other Turkic communities in East Turkistan. The repeated, open-ended, and unexplained delays call into serious question the credibility of her Office to fulfil its mandate.

During her four year tenure, Bachelet has been entirely silent on the human rights crisis enveloping Tibet and failed to even request access to the occupied country despite no High Commissioner visiting since 1998. She did not visit Tibet on this trip, and when she finally mentioned Tibet during her end-of-visit press conference it was brief and in general terms, failing to take the rare opportunity to critique and address the unprecedented, systematic and escalating attacks taking place on Tibetan language and identity today [6]. She also referred only to the “Tibet Autonomous Region,” – what China refers to as Tibet – ignoring the Tibetan autonomous prefectures and counties in Sichuan, Qinghai, Gansu, and Yunnan that make up half of Tibet and are home to more than half of the total Tibetan population [7].

Moreover, the High Commissioner did not visit Hong Kong and failed to condemn the Chinese government’s unrelenting campaign to destroy human rights and democracy in the city, which had escalated since the most recent mass protests broke out in 2019. In her end-of-visit statement, she grossly underplayed the crackdown, calling the arbitrary detention and incarceration of over 1,000 political prisoners under the National Security Law and other alleged crimes only as “deeply worrying”[8]. This is yet another sign of her inexplicable unwillingness to confront Chinese leaders over well-documented and egregious abuses of human rights.

The High Commissioner also made no mention of Southern Mongolia (Ch: Inner Mongolia), despite Chinese authorities engaging in a far-reaching assault on Mongolian identity and the unprecedented mass protests across Southern Mongolia in 2020. No reference was made to China’s so-called “bilingual” education program which recently replaced Mongolian with Chinese as the language of instruction in all elementary and middle schools nor to all the Mongolian herders who have been targeted for fighting policies that are destroying their traditional livelihoods, including China’s illegal land confiscations.

The High Commissioner has wasted a much needed opportunity to meet with top Chinese leaders as she shied away from publicly raising and condemning the widespread torture, enforced disappearance, arbitrary detention, organ harvesting, and routine persecution of faith communities. Instead, Bachelet lauded the Chinese authorities for making what she called “important legislative and judicial reforms” as well as “improvements for protection of women’s rights.”

Bachelet also naively posed for a photo opportunity with Chinese Minister of Foreign Affairs, Wang Yi, who presented her with a book of Xi’s quotations on “human rights”. She furthermore gave praise to China’s commitment to multilateralism, despite widespread evidence that Beijing has routinely sought to silence criticism of its human rights record before UN bodies and weaken UN institutions [9].

The High Commissioner’s end-of-visit statement, attempted to claw back some legitimacy by stating that she “met virtually with a number of civil society organisations.” In doing so, she failed to mention that this was the first time in four years that she agreed to meet with any affected communities despite consistent requests. By holding a two hour virtual meeting a matter of days before her visit, she limited the space and scope of any substantive discussions. The meeting invitation only came after 220 Tibetan, Uyghur, Hong Kong, Southern Mongolian, and Chinese democracy groups demanded the High Commissioner reverse her plans to visit China or risk walking into a propaganda minefield laid out by the Chinese Communist Party [10]; a that fear that has now been materialised.

The failed visit by the High Commissioner has not only worsened the human rights crisis of those living under the Chinese government’s rule, but also severely compromised the integrity of the Office of the High Commissioner for Human Rights in promoting and protecting human rights globally. An independent, experienced and honest High Commissioner is crucial to ensure truth, justice, and reparations for crimes committed in violation of international law. Michelle Bachelet has repeatedly fallen short in her ability to uphold this vital mandate and it is under such reprehensible conditions that we are calling for her immediate resignation.

[1] “In accordance with General Assembly resolution 48/141, the United Nations High Commissioner for Human Rights is appointed by the Secretary-General of the United Nations and approved by the General Assembly, with due regard to geographical rotation for a fixed term of four years with a possibility of one renewal for another fixed term of four years.” https://documents-dds-ny.un.org/doc/UNDOC/GEN/N94/012/56/PDF/N9401256.pdf?OpenElement

[7] ‘Tibet’ refers to the three Tibetan provinces of Amdo, Kham and U-Tsang. In the 1960s, the Chinese government split Tibet into new administrative divisions: the Tibetan Autonomous Region (TAR), and Tibetan Autonomous Prefectures within Qinghai, Gansu, Sichuan and Yunnan Provinces. When the Chinese government references Tibet, it is referring to the TAR.