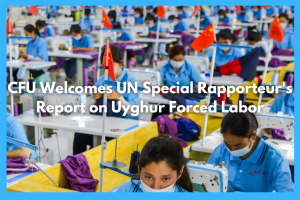 The report has found that “some instances [of forced labor] may amount to enslavement as a crime against humanity, meriting a further independent analysis.” This would likely refer to internment camp-linked forced labor which can create such conditions. This is an extremely important and comprehensive assessment, coming from the U.N. special rapporteur in the context of a report on contemporary forms of modern slavery worldwide, published for the Human Rights Council’s 51st session.

It is also important to note that the report adopts Dr. Adrian Zenz’s (Senior Fellow and Director in China Studies at the Victims of Communism Memorial Foundation) conceptual framing of Uyghur forced labor: “(a) the vocational skills education and training center system, under which minorities are detained and subjected to work placements; and (b) the poverty alleviation through labor transfer system, where surplus rural laborers are transferred into secondary or tertiary sector work.”

Executive Director Rushan Abbas said “We have been telling the world for years that China uses Uyghur slavery as an essential tool and enabling China’s economy and making the ongoing Uyghur genocide a profitable venture. It’s a relief to see the United Nations finally recognize the extent to which these atrocities are taking place. Now tangible actions are needed to hold the CCP accountable for these crimes based on these recent findings.”

CFU once again urges the UN high commissioner on human rights Michelle Bachelet to release her report on the Uyghur genocide as soon as possible, and hold China to account for their heinous crimes. We also call upon like-minded partners to take tangible actions like; divesting from the Chinese market, passing laws to restrict bringing goods from slavery, boycotting Chinese goods and sanctioning the main orchestrators of the concentration camps to end the Uyghur genocide once and for all.