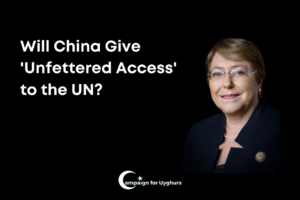 Campaign for Uyghurs welcomes the United Nations’ top human rights official, Michelle Bachelet, to visit East Turkistan to assess the situation on the ground, however we are concerned China will heavily curate her visit. China is notorious for calling on investigators, journalists and diplomats, after the fact, and staging government-led tours to whitewash the reality of the largest genocide since the Holocaust.

We urge Ms. Bachelet to uphold the mandate to “promote and protect the enjoyment and full realization, by all people, of all human rights.” We have seen Ms. Bachelet speak out in the past against human rights violations in many countries, but has failed to competently do so against China. We call on her to release her report on the abuses happening in East Turkistan before she visits. She must send a clear message to the Chinese government that that this visit is a serious onethat will have a purpose to collect evidence and pursue for culpability for genocide and crimes against humanity.

Executive Director Rushan Abbas said today “Ms. Bachelet needs to be given unfettered access to East Turkistan. This means she should be able to interview whomever she wants, especially my sister, Gulshan Abbas, who has been illegally detained in China since September 2018. This visit must be in a pure form situation free from government intrusion. It must be a space where  individuals may speak freely without repercussions or ramifications for any testimony given. It must be ensured that Bachelet is able to visit the confirmed locations of the geo-located concentration camps confirmed by researchers and satellite experts in order to draw independent conclusions on the truth.”

A grave concern about this visit is that China may have already cleaned up the ‘crime scene’. After all, it has been 17 years since a United Nations high commissioner for human rights has visited China. This is a significant moment and has massive implications in terms of calling attention to this genocide. It would be complete negligence and an undermining of her job for Ms. Bachelet’s findings to support the Chinese narrative. Bachelet has an obligation to uphold her given duties and to call out the regime’s mistruths. For instance, she must discredit once and for all, the lie that Uyghurs are simply being educated in so-called vocational schools. She must decry these crimes against humanity. However, we remain confident that Ms. Bachelet will uphold her global duty to honestly report the truth, free from influence, pressure or coercion. We have confidence her team will see past the government-led glamor show. We urgently await her report in two months that will hold China responsible for their misdeeds and suggest proper resolutions to hold accountable all that are involved in this Genocide. The world depends on this honest report that Bachelet has been given the responsibility to deliver.