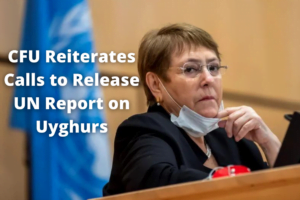 Campaign for Uyghurs (CFU) welcomes the indications that the UN High Commissioner for Human Rights Michelle Bachelet will be visiting East Turkistan (called the “Xinjiang Uyghur Autonomous Region” by China) as her five-member team arrives in Guangzhou. It is highly unlikely that Bachelet will be given unfettered access, as China had refused a visit unless the trip was “friendly” in nature. However, releasing the OHCHR report on human rights violations by the CCP on Uyghurs is the most critical action which has been delayed for unknown reasons.

CFU has repeatedly demanded this report be released. On March 08, 2022, Campaign For Uyghurs joined 193 organizations asking Michelle Bachelet to share the report before her upcoming visit to East Turkistan. This request was met with silence. Because of the lack of transparency around the upcoming visit to China by Ms. Bachelet, CFU, along with 59 international human rights groups, released a joint statement on April 18, 2022, setting out core preconditions to be met by the UN High Commissioner in order to have a credible and independent visit to China.

Before Bachelet sets foot on a plane to China it is essential that she meets with Uyghur groups, camp survivors, and those directly affected by the atrocities to hear their stories. Without this, a China visit would lack credibility and transparency. Bachelet needs to ensure that her engagements with the Chinese government are transparent, and minimum criteria for an unfettered visit are met. To date, the Chinese government has given no sign that the High Commissioner will be allowed this level of access. She should not fail the victims of China’s genocide by allowing the authorities to control her visit.

Executive Director Rushan Abbas said today “While I welcome news that the High Commissioner’s visit is seemingly moving forward, I am concerned that this is another tactic to delay the release of her report on Uyghur genocide until her term expires. Her visit is contingent on Covid restrictions, and she may spend weeks in quarantine moving from city to city, hampering her ability to investigate.”

Currently, millions of Uyghurs are held en masse in concentration camps in an attempt to destroy the Uyghur people. Millions more are in forced labor programs where they mine quartz for solar panels, pick cotton for garments, or work in factories as modern-day slaves. Reports of sexual violence and rape have been made by survivors of concentration camps, giving insight to the horrific conditions Uyghurs endure in these camps.

CFU urges human rights organizations and allies of Uyghurs globally to join the call for Ms. Bachelet to release the report before her visit. The Uyghur genocide and Beijing’s crimes against humanity cannot be ignored by the UN any longer, and the release of this report is a keystone in ensuring international action to end these ongoing atrocities.