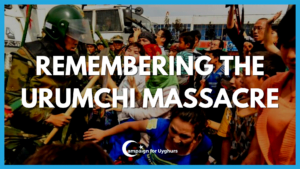 Campaign For Uyghurs (CFU) recognizes this year as the 12th anniversary of the Urumchi massacre, a critical moment in the history of East Turkistan. This occasion holds solemn significance, as Uyghurs in East Turkistan face an increasingly destructive campaign of genocide, and Uyghurs abroad face the ever growing reach of the CCP. The Urumchi massacre illuminated the lengths the CCP were willing to go to in order to maintain their repressive regime.

On July 5th 2009, the peaceful demonstration in Urumchi was a response to the Shaoguan Toy Factory killings on June 26th, 2009, where two Uyghurs were falsely accused of sexual assault, followed by many Uyghurs being killed, and hundreds wounded, by a mob of hundreds of Chinese that brutally attacked. The Urumchi protests turned violent when police forces fired on the empty-handed demonstrators and triggered a week-long campaign of mass arrests of the innocent Uyghurs and retaliation. The roots of much of today’s genocide lie in the response to this event. Following the crackdown, thousands of Uyghurs disappeared from Urumchi.

These disappearances served as a precursor to the surveillance state that was established in the years following, culminating in a present pattern of disappearances that have affected millions of Uyghurs around the world. In their attempts to blame the World Uyghur Congress for the events, the CCP laid the groundwork for its campaign against “Terrorism” that would find its peak in the “Strike Hard Against Violent Terrorism” campaign. The violation of human rights in 2009 was in many ways the beginning of the visible erasure of the Uyghur people, and the beginning of this genocide.

Executive Director of Campaign For Uyghurs Rushan Abbas commemorated the victims of the Urumchi massacre, saying “When history looks at the response to popular movements, it determines whether they were proportionate and just. In Urumchi in 2009, what we witnessed was the CCP seizing an opportunity to further their colonial and genocidal aspirations in East Turkistan. The brutal police crackdown was followed by the institutionalization of a system that made possible the disappearance of vast swaths of Uyghurs as well as similar police brutalities in Hong Kong against peaceful protesters. As this genocide now accelerates even further, we cannot forget the origins, and we must learn to heed warnings like these in the future. The CCP does not care for the rights of anyone who stands in their way, for they are seen only as obstacles, not people.”

What lessons do we carry with us on this day? We know that the cruelty of colonial powers is not assuaged until their goal of total control has been achieved. Today, we hear the echoes of the bullets fired that week in Urumchi, and pay respect to those who stood up for human dignity against such insurmountable odds. The movement to end the genocide against the Uyghurs faces a regime that is more powerful, more brutal, and more of a danger than ever, and it is with the memory of those in Urumchi that we declare there will be no surrender until justice is delivered.

2019 Protest with Photo Exhibit on the Urumchi Massacre

Press Release: Campaign For Uyghurs Commemorates the 10th Anniversary of the Urumchi Massacre