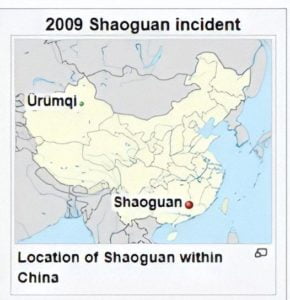 The city of Shaoguan, a primarily ethnically Hakka region, was an environment where tensions easily flourished and complaints about unfair treatment of Uyghurs in the factory were widespread.

While the Chinese authorities claim only two Uyghurs died, more than 120 people were wounded, and 81 of them were Uyghurs. In the Shaoguan Toy Factory attack, Uyghur sources report via eyewitnesses, the number of the deaths at night to be at least twenty with more than half being females. The attack by several hundred Chinese workers started at 2 am and lasted until 4 am but the police did not arrive at the scene then.  The racial tensions and following immediate ostracization of Uyghurs in Guangdong, remind of the systematic discrimination and abuse that Uyghurs have faced for decades under the Chinese government.

Today we are reminded again of the lack of fair means for Uyghurs to resolve their grievances and must renew our dedication to advocating for the human rights and democratic freedoms of Uyghurs. Justice for all means true stability, something the Chinese government is not pursuing.