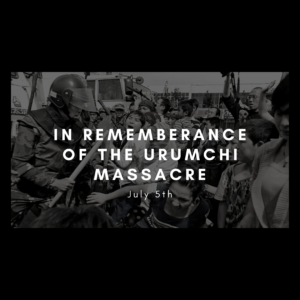 On July 5-7, 2009, the world watched in horror, but with little understanding of what they were viewing, as thousands of lives were destroyed and China played as the victim just as they continue to do at present. Thus, unsurprisingly, it is ludicrous to suggest that anyone can actually believe the Chinese government reports on what happened in Urumchi. The same government which mowed down student protestors in Tiananmen with guns and tanks does not inspire faith in its narrative regarding how peaceful protests turned violent. In a country that considers any type of free expression threatening, it is tragic that these massacres have continued to be twisted as propaganda used to control Han Chinese citizens in fearing the Uyghurs and justifying their genocide. Today, Campaign for Uyghurs (CFU) remembers with somber reflection.

The pain and tragedy of the events of July 5th continue to drive home the reality that Uyghurs are strangers in their own homeland, denied the opportunity to express grief or grievance, and the response from both Han and Uyghur leaders in the aftermath of the violence was telling. The Chinese government continued to cover up the number of Uyghurs who had died or were arrested, stoked racial tensions and fears, and used the Chinese military’s merciless gun fire against the innocent Uyghurs who were carrying Chinese flags while they were peacefully protesting to stop this free expression. After shutting off the electricity for the entire city after sunset, they moved in the cover of darkness to provoke Han Chinese mobs to attack and kill more Uyghurs on the streets of Urumchi.

Rushan Abbas, executive director of CFU, said, “In the past the Chinese regime’s committed violence against peaceful protests without consequences. In East Turkistan, in Tibet and in Hong Kong this has been the case, so of course as China remains unchecked and the regime continues to commit this type of violence. The world cannot claim ignorance any longer. They have all turned a blind eye to the pattern of Chinese state intimidation and violence for far too long.”

What the Chinese government is doing in East Turkistan is terrorism by the state: ordinary people living in terror because of suppressive policies, having not rule of law but ruled by law, and deprived of all basic rights. The regime has become a rogue state, terrorizing the people. There is no justice in China. We must recognize the value of every human life, and continue to seek justice for all in staunch opposition to what the Chinese government continues to push across the globe.

Without justice, how can there be peace? The Uyghurs today remain exiles and victims of genocide in their own brutalized homeland. On such a sad day like this, we honor those brave souls who sacrificed their lives for justice on July 5th, 2009. Their spirit gives us courage to continue our rightful advocacy campaign to hold China accountable for their crimes against humanity and fight for freedom of the Uyghur people. We are not alone in this fight, and together we will not stop until justice, equality and freedom are delivered.