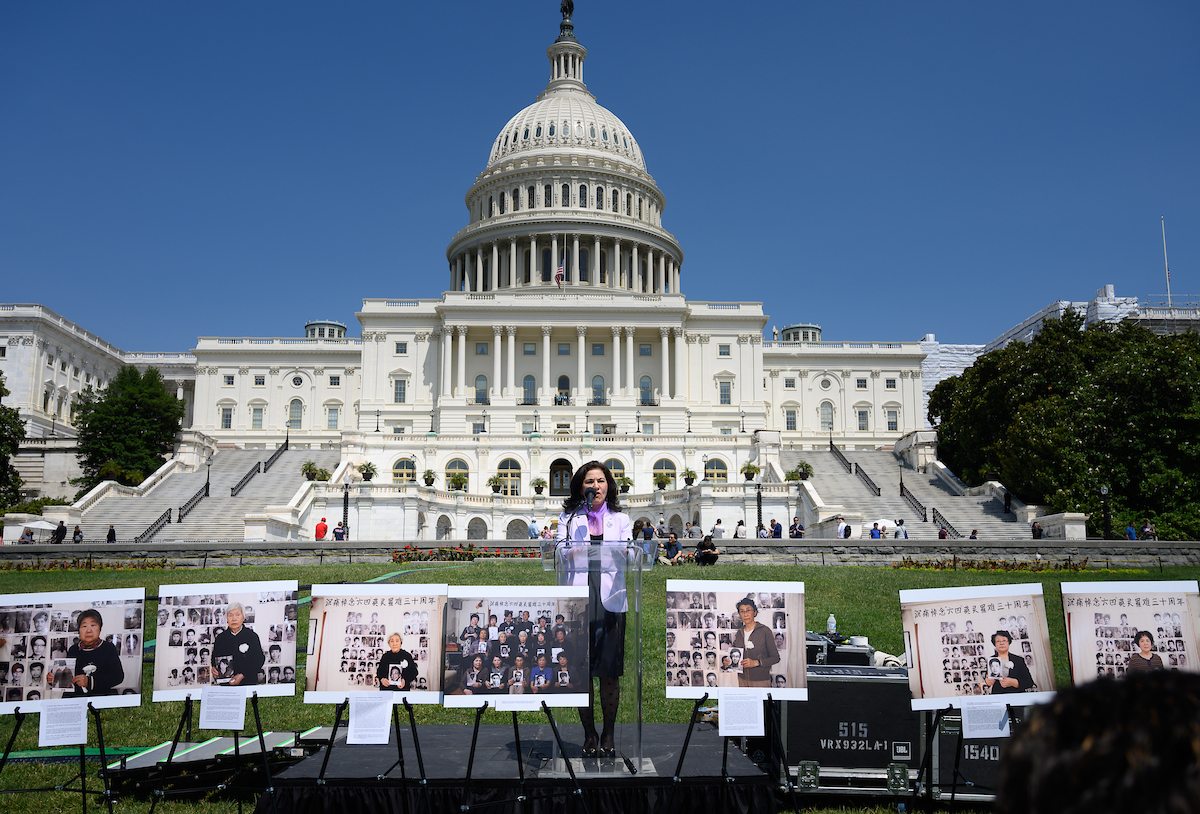 Greetings to all, and my heartfelt appreciation for the Victims of Communism Memorial Foundation for giving me this opportunity to address today.

As Madam Speaker Pelosi pointed out here, it has been 30 long years since we have witnessed the state of terror when Communist China massacred its own unarmed young students in order to maintain its brutal authority.  Yet 30 years after, in China, communist ideals are alive and well. This totalitarian ideology has returned to the world in full force. And it is backed up by China’s enormous economic power.
My people, the Uyghurs are an ethnically and culturally Turkic people, which has been under the control of Communist China since 1949. As a result of our unique ethnic identity, culture, language and religion, we have been persecuted and repressed for decades.

Now, the Communist Chinese government is conducting genocide against the Uyghurs with mass surveillance, modern-day concentration camps, repression and evilness, challenging human dignity and basic survival rights that God gave us with our birth. The Communist regime is getting away with it in front of the entire world. Now, the entire population of East Turkistan, including my sister Dr. Gulshan Abbas has become the victims of Xi Jinping’s Belt and Road initiative, the blueprint for his imperialistic dream for the world domination. Between trade threats, the belt and road initiatives power, debt trap diplomacy, and manipulation of the UN, China has become a power able to strong arm the world.
The individual freedom to choose ‒ to choose what we believe, how we believe, and why we believe ‒ is one of the major achievements of the modern world. It defines our sense of liberty, of the freedom of conscience that we all take for granted. Yet now this foundation of our freedom is coming under attack. This disturbing trend is clearly visible in the persecution of the Uyghurs. This issue, the persecution of the Uyghurs, is only one part of a rising tide of intolerance that is rapidly covering the world. This struggle should be the concern of everyone who values the basic human rights of dignity, respect, and freedom of belief for all people. These rights are a fundamental part of the human legacy, our legacy, that is increasingly under attack from a new totalitarian threat, which is the return of communism through China’s rise to power.

We must hold our leaders accountable and demand that they raise this issue with the Chinese government. We need to let the millions of innocent people who are suffering and arbitrarily detained in East Turkistan know that we have not forgotten them and that we will not rest until they are freed. To make things change with the communist regime, we must all raise our voices.
China is the biggest communist threat in the world today and it dangers the world stability, western values, and democracy for all humans! It is on us, with our actions put an end to this despicable malice practice on our watch. Our silence and inactivity will undermine what we value in this great country! 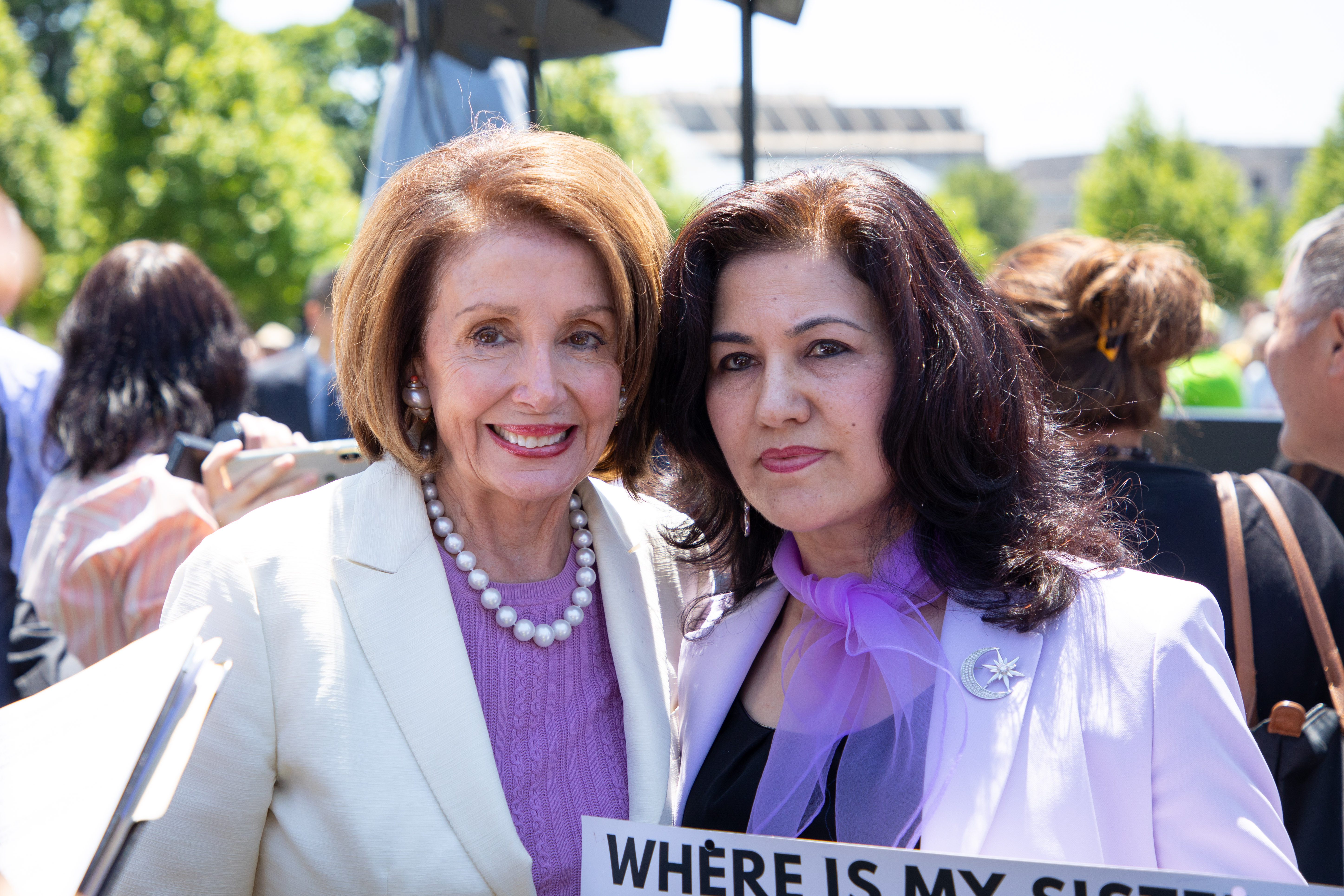 The letter by the seven Democratic Senators was sent to Mr. Trump “[…] to express concern about reports that your administration is delaying the imposition of targeted sanctions against Chinese officials involved in human rights abuses against the Uyghurs and Central Asian Muslim population in Xinjiang.”

The seven Senators speak openly of “the gravity of the situation” in Xinjiang, citing the State Department’s recent Country Report on Human Rights Practices, which prompted Secretary Pompeo to describe the Land of the Red Dragon as “[…] in a league of its own when it comes to human rights violation.” The letter also quotes Human Rights Watch and other organizations on the repressing and ever-controlling apparatus displayed and employed in Xinjiang, plus the testimony given by Ms. Rushan Abbas, founder, and president of “Campaign for Uyghurs,” an advocacy group based in Herndon, Virginia. 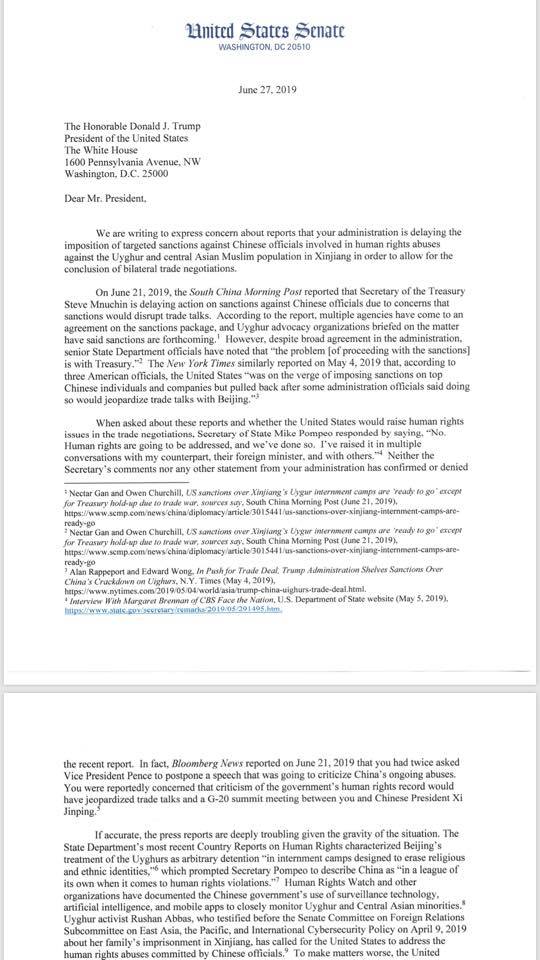 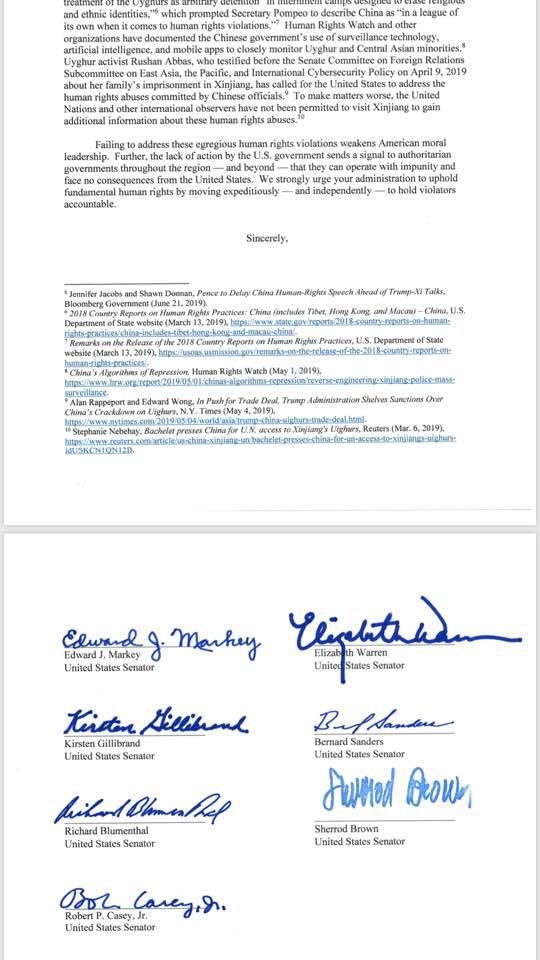 On July 5, 2019, the World Uyghur Congress commemorates the 10th anniversary of the July 5th, 2009 Urumqi Massacre.  Protests will be held around the world to remember all those who were killed, forcefully disappeared and the thousands of peaceful Uyghur protesters who were injured by the armed Chinese police and security forces between July 5-7 in 2009.

Please join the protest organized by the Uyghur association around the world and be a voice for the voiceless people in East Turkistan. 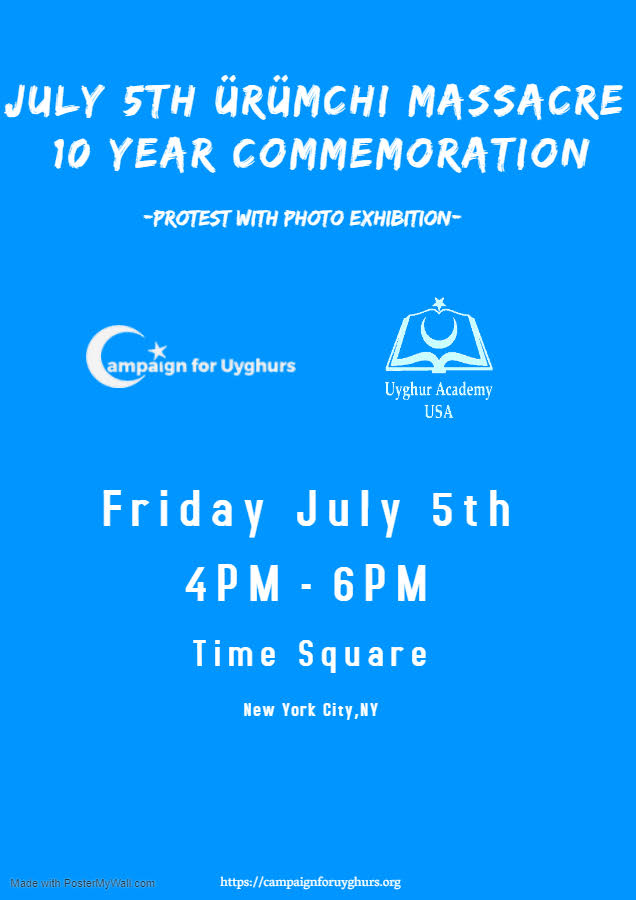 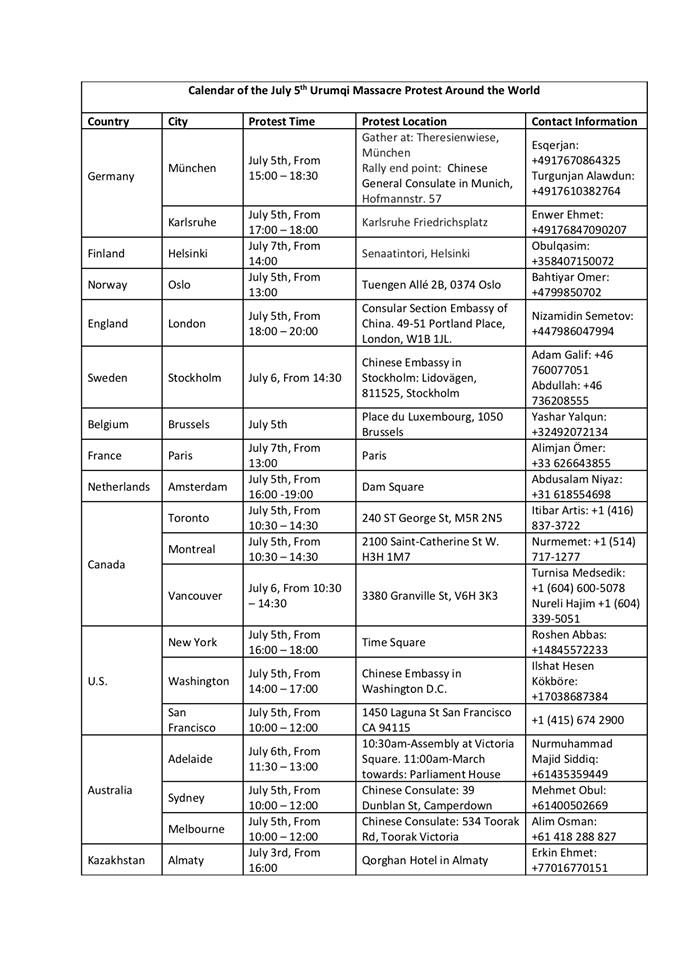 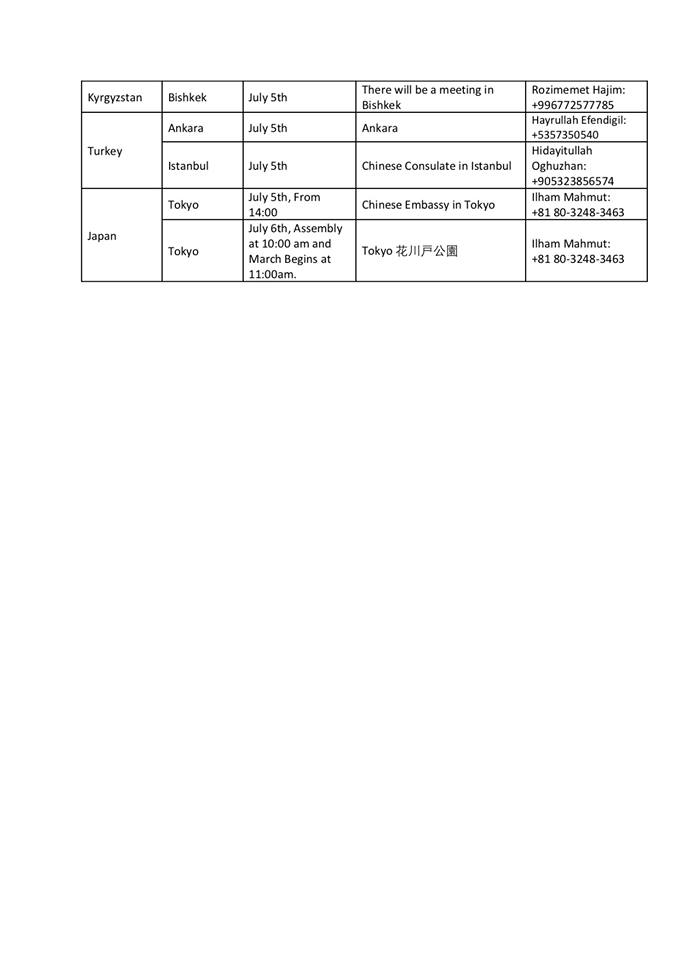 China has perfected the art of persecution over decades of Human Rights abuses and forced assimilation.

The discussion will be in English and will be moderated by Kateřina Procházková, Sinopsis. 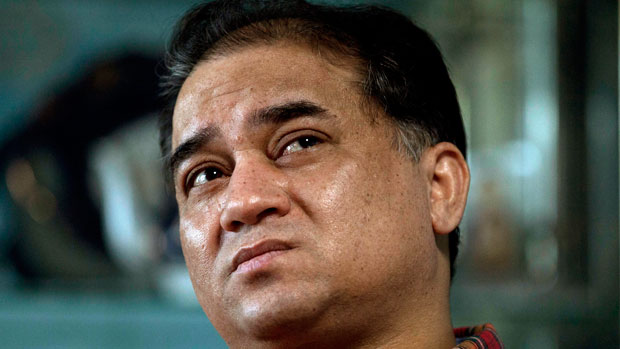 Jailed Uyghur scholar Ilham Tohti was honored on Wednesday at a ceremony in Washington D.C., where he was given the Freedom Award in absentia by the democracy watchdog group Freedom House.

Accepting the award on her father’s behalf at the May 8 gathering at Washington’s Ritz-Carlton Hotel, Tohti’s daughter Jewher Tohti said that she wished her father could have been present to accept his award in person.

“[And] I wish that this recognition were unnecessary,” Jewher Tohti said, “because that would mean that the Uyghur people were free.”

Ilham Tohti is someone who sees political and cultural oppression as a problem to be fixed, Jewher Tohti said, adding that China’s treatment of the Uyghur ethnic minority in northwestern China’s Xinjiang region, the Uyghurs’ historic homeland, “was always causing bigger societal damage.”

“Even before the horrendous crackdown, the camps, the torture of innocent people, China was creating larger, longer-term problems between groups of people,” she said.

“When people are treated and labeled as separate or different, as wrong or bad, human connection cannot happen.”

In remarks introducing the granting of the award, U.S. Senator from Colorado Cory Gardner said that Ilham Tohti knew that he would someday be jailed for “telling the story of his community, the Uyghurs.”

“He expected that his peaceful calls for connection and understanding between Uyghurs and Han Chinese would need to be silenced,” Gardner said.

“Like other historic champions of freedom and human rights, Ilham Tohti embodies a fearlessness to which we all aspire,” Gardner said, adding, “To put the cause of human liberty ahead of your own life is the ultimate act of courage,” Gardner said.

An outspoken economics professor who regularly highlighted the religious and cultural persecution of the mostly Muslim Uyghur ethnic minority in northwest China’s Xinjiang region, Tohti was charged with promoting ethnic separatism and was handed a life sentence by a Chinese court on Sept. 23, 2014 following a two-day trial.

The court decision cited Tohti’s criticism of Beijing’s ethnic policies, his interviews with overseas media outlets, and his work founding and running the Chinese-language website Uighurbiz.net, which was shut down by Chinese authorities in 2014.

International rights groups and politicians in the U.S. and Europe have condemned China’s network of political “re-education camps” that have held up to 1.5 million Uyghurs and other Muslim ethnic minorities accused of harboring “strong religious views” and “politically incorrect” ideas since April 2017.

Though Beijing initially denied the existence of the camps, China has tried to change the discussion, describing the facilities as “boarding schools” that provide vocational training for Uyghurs, discourage radicalization, and help protect the country from terrorism.