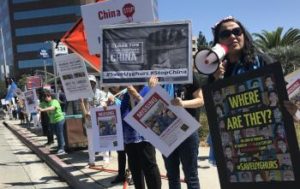 Jewish World Watch (JWW) is proud to report two major accomplishments in our advocacy work related to the Uyghur (or Uighur) human rights crisis, which we have deemed a cultural genocide and potential mass atrocity situation.  In the late evening of September 11, the United States Senate passed the Uyghur Human Rights Policy Act (S. 178), a vital piece of legislation to promote greater understanding of and accountability for the Chinese government’s multidimensional and escalating persecution of the Uyghurs.  This comes on the heels of JWW’s first rally to raise awareness of the plight of the Uyghurs, which took place at the Federal Building on Sunday, Sept. 8.

The Senate’s unanimous approval of the Uyghur Human Rights Policy Act marks the first passage of any legislation by any nation in response to the human rights abuses being perpetrated by Beijing against ethnic Uyghurs in northwest China’s Xinjiang Uyghur Autonomous Region (XUAR), called East Turkestan by the Uyghurs.  JWW welcomes this important milestone in raising awareness of the potential atrocities and showing the Chinese government there will be consequences for its widespread and systematic human rights abuses and probable crimes against humanity.

If also passed by the House and signed into law by the President, the bipartisan Uyghur Human Rights Policy Act would appoint a special State Department coordinator on the XUAR and require regular reports on the region’s internment camps, surveillance network, and security threats posed by the ongoing crackdown on the Uyghur people.