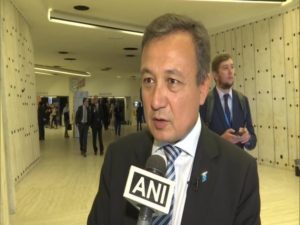 The World Uyghur Congress on Monday came down heavily on Pakistan Prime Minister Imran Khan over his “double standards” and turning a blind eye towards the issue concerning the persecution of Uighur Muslims in China, saying it is a matter of shame that Islamabad was silent and supporting Beijing’s policy on the minority community.”A couple of months ago, international journalists asked him about this (Uighur issue) several times, but he said that he doesn’t know and is not aware of it. Pakistan Prime Minister very well knows what the Chinese government is doing to Uighur Muslims but he doesn’t want to talk on this,” the organisation’s president Dolkun Isa told ANI here.”Pakistan is one of the biggest violators of human rights and China is hiding the reality internationally,” he said.
Responding to China‘s claims that Uighur detention camps were actually vocational training centres, the activist said it was a “lie” as China is hiding things.
“It is just a lie from the Chinese side…They are trying to hide things and are committing crimes against humanity,” Isa remarked.
“Pakistan Prime Minister brings up the Kashmir issue all the time but when it comes to the Uighurs he closes his eyes and supports China‘s policy. This is a double standard. It is a shame,” he said.
Imran Khan, who is desperately attempting to portray himself as an ambassador of Kashmiri people, has come under fire for his “double standards” over China‘s treatment of Uighur Muslims.
In an exclusive interview to Al Jazeera that was aired on August 14, Imran Khan talked at length about his version of conditions of Kashmiris and how BJP led government is “racist” and “fascist” while shockingly expressing complete ignorance on the issues being faced by Uighur Muslims.
During the interview when journalist Mohammed Jamjoom asked the cricketer-turned-politician whether he had ever got a chance to discuss the issue of Uighur Muslims with Chinese President Xi Jinping, Khan replied that he does not know “much” about the problem and that Beijing is Islamabad’s “best friend”.
“No, I have not. We have been facing so many of our internal problems right now that I do not know much about this problem. Let’s face it, ever since we came to power, apart from the economy and apart from dealing with the situation in Kashmir, we have been inundated with problems,” Imran Khan said.
“I will say one thing about China. For Pakistan, China has been the best friend,” he added.
China has been condemned internationally for cracking down on its Muslim minorities.
Beijing has been accused of oppressing the Uighurs by sending them to mass detention camps, interfering in their religious activities and sending the community to undergo some form of forceful re-education or indoctrination.