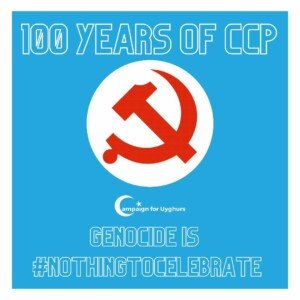 July 1 marks the 100th anniversary of the Chinese Communist Party, which seized power in 1949, marking the beginning of a dark era in history, defined largely by bloodshed, mismanagement, brutal repression, and slavery. Today, that has morphed into active genocide in East Turkistan.  As the Chinese regime looks to celebrate a milestone of achievement, millions of Uyghurs are being held in concentration camps where their very culture is made criminal, where they are subjected to sexual abuse, and tortured. Campaign for Uyghurs (CFU) condemns this celebration as an offensive show of force. 100 years of CCP control is nothing to celebrate.

Uyghurs are kept in the dark about their families, with millions missing, loved ones unable to contact them or know anything regarding their condition. Beijing will mark this dark occasion with pageantry and demonstrations of power to showcase all the CCP has to offer China. But if the world needs to know what they offer, they should look to their demonstration of power in East Turkistan. This is the regime waging war on religion and that views Islam as a mental illness. This is the regime that murdered protesters in Tiananmen Square, Baren, Ghulja and Urumchi. This is the regime that would see the Uyghurs, Tibetans, Southern Mongolians, and Hong Kong destroyed for their own gain. Their control of China has been largely managed through a complex system of propaganda and repression of free speech, one that is only expanding in East Turkistan today.

This dark occasion also serves to remind us that our world will only grow darker so long as the international community remains willfully blind to the truth of what is happening in China. The CCP’s aims are becoming more broad, and they seek international influence through their Belt and Road Initiative (BRI). They desire more control and more power, and have demonstrated clearly what they are willing to do to get it. We must stand up as one people and declare that we see the CCP for what it is: A brutal regime that is nothing more than a colonizing force driven by imperial and genocidal aims.

Rushan Abbas, Executive Director of Campaign for Uyghurs remarked “The Chinese Communist Party has been an oppressive force of destruction globally. Under the guise of economic improvement, they have seized the basic rights of everyone living under their iron thumb. Now, they have instigated this horrific genocide of the Uyghur people, a crime that invalidates the right of any perpetrator to rule. This is a deeply sad day for the world, since we have yet to stop the CCP’s reign of terror. The genocide of the Uyghurs is ongoing still, and each day the Party is becoming bolder. This is our final wake-up-call that the CCP must be stopped if we are to preserve a global system of dignity and order that is respected by all.”

As fireworks burst in China, they will ring as an insult to the millions of people suffering under CCP rule. They will illuminate a nation that has eschewed freedom of religion and democracy in favor of the authoritarian rule. President Xi Jinping will call for 100 more years of Chinese Communist rule, but that is a decision that can be up to the international community. We must hold the CCP accountable, for Uyghurs all over the world, and for every person who has seen their life destroyed in the Chinese regime’s relentless pursuit of power.