Remembering the Ghulja Massacre: The Path to Genocide Accelerated in 1997 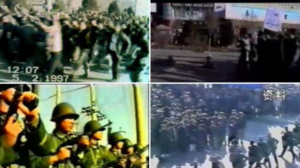 February 5, 1997 is a date seared into the collective memory of the Uyghur people. On this day, thousands of Uyghur citizens of East Turkistan marched against racial discrimination in the streets of Ghulja to call for human rights and democratic freedoms.

As a result, Chinese police opened fire, massacring innocent people who were peacefully protesting, before arresting 1600 or more civilians for their participation. Hundreds were later executed.

In an article marking the anniversary of the massacre last year, Zubeyre Shamseden, Director of the Human Rights Committee for World Uyghur Congress, wrote, “I lost a brother, Sadirdin, a nephew, Hammat, and a cousin, Abduxaliq Abdureshid forever. Another brother, Abdurazzaq, is still serving his prison sentence to this day–it has been 23 years. My heart bleeds when I think of them.”

Just as the Tiananmen Square massacre did not serve as enough warning on engaging with the Chinese regime, the international community ignored the warning signs in Ghulja and has continued to buy into the Chinese Communist Party’s propaganda regarding the Uyghurs.

The path was paved for the current genocide in 1997, and each and every global incident has been seized upon and manipulated to serve China’s neo-colonialist ambitions. The CCP has always sought to silence concerns rather than address them.

Campaign For Uyghurs Executive Director Rushan Abbas remarked that “The bitter memory of this massacre is a deep wound. The pain has only been compounded by the absence of justice for the actions of the Chinese regime. At that critical point in time, the international community remained silent. This silence was taken as encouragement for the CCP to continue to strengthen itself at the expense of the Uyghurs and move forward with conducting systematic mass rape, torture, and ultimately genocide. At present, they march forward unobstructed in their quest for world domination as the Uyghurs and other voices of dissent continue to be brutally crushed.”

Today, we honor the memory of the victims and commit to ending the suffering of the Uyghur people. We expect the United States to take a hardline approach regarding this genocidal regime. The CCP cannot be trusted on any front as rising ultra-nationalism by the Chinese officials is being used to wage a war on our democracy, freedom and human rights.