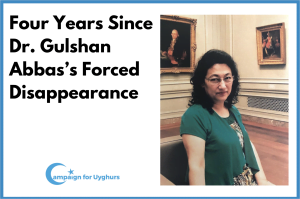 This Sunday, Campaign for Uyghurs (CFU) marks four years since Dr. Gulshan Abbas, sister of founder and Executive Director Rushan Abbas, was a victim of enforced disappearance by the Chinese government. Dr. Abbas was later harshly sentenced to prison without trial as a retaliatory act against Rushan Abbas’s activism and advocacy. Gulshan Abbas is a victim of transnational repression and the broader atrocities of China’s genocide against Uyghurs and Turkic peoples.

In September 2018, Gulshan Abbas was taken by the Chinese government six days after Rushan Abbas spoke on a panel about the Uyghur genocide and the mass detention of Uyghurs, including the majority of her husband Abdulhakim Idris’s family. Despite an international campaign demanding information and her release, China continued to deny that they had detained Dr. Abbas. Only after CFU held a joint press conference with the Congressional-Executive Commission on China (CECC) in December 2020, revealing that Dr. Abbas had been secretly tried and imprisoned under sham charges did Wang Wenbin, the Chinese Ministry of Foreign Affairs spokesperson, confirm these allegations.

“It’s beyond painful to keep remembering this day over and over again, like an unending nightmare. We are the living proof of this horror caused by the Chinese government. The UN has issued its finding and it is past time to put people’s lives and human dignity ahead of any economic, business interest with the Chinese government. They must be called out for these atrocities. Our pain has been compounded over multiple years of battle for the human dignity that our loved ones deserve and now it’s time this burden is shouldered,” Ziba Murat, daughter of Dr. Gulshan Abbas said. “My mother’s case is just the tip of the iceberg. As millions of others suffer similarly, action is crucial. My mom must come home, families must be reunited. We, our entire family, will double down until I have my mom in my arms. She must be freed!”

This genocide, for all of its geopolitical implications and global impacts, is fundamentally a destruction of families and people. Behind every condemnation and every rally is a mother,  daughter, son, or father who has had their life stolen. The face of this genocide is made up of people like Gulshan.

“It is a travesty that Gulshan Abbas has been imprisoned by the Chinese government for four years without recourse and without any communication with her loved ones. She must be freed along with all Uyghurs unjustly detained,” said Congressman Tom Suozzi, who is the co-chair of the Congressional Uyghur Caucus.

Dr. Rishat Abbas, brother of Gulshan Abbas, President of Uyghur Academy-International and Senior Advisor to CFU, said “It has been a heart-wrenching four years for our family. The Chinese regime’s genocide has torn apart families and shattered lives. Uyghur families, separated by the ruthless policies of the CCP, need to be reunited. The Chinese government must provide proof of life and means to communicate with our loved ones back home. My sister is an innocent victim of this genocide, abducted to retaliate against our family and our advocacy work. My sister must be released.”

On August 31, the long-awaited report on Uyghur human rights was released by the United Nations Office of the High Commissioner for Human Rights. The report recommends that China “Takes prompt steps to release all individuals arbitrarily deprived of their liberty,” and to clarify “whereabouts of individuals whose families have been seeking information… including by providing details of their exact locations and establishing safe channels of communication and travel enabling families to reunite.” These critical points must be taken by China immediately. Like so many innocent Uyghurs, Gulshan Abbas is a victim of the extrajudicial and arbitrary detention system that has cruelly held millions.

With the release of the UN report, there must be no more waiting. Action must be taken by the international community to protect Uyghurs in the diaspora from transnational repression, release Uyghurs from arbitrary detention, and demand the whereabouts of Uyghur individuals who have disappeared, including Gulshan Abbas. For all that that this case represents, and for the future of the free world, we must act to end this genocide.