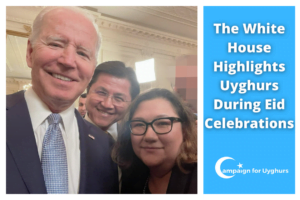 Ziba Murat, daughter of illegally incarcerated Gulshan Abbas, joins in Eid celebrations at the White House, invitation by US President Joe Biden and his wife, Jill Biden, as the couple held a special gathering for the festival of Ramadan for Muslims at the White House on the afternoon of May 2, the first day of Eid al-Fitr. The banquet was attended by representatives of US government agencies, various sectors and communities, as well as diplomats from Muslim countries. The commissioner and Vice Chair at the United States Commission on International Religious Freedom (USCIRF), Mr. Nury Turkel also attended the event.

President Biden specifically mentioned Uyghurs in his speech on Eid al-Fitr, saying “Today around the world we’ve seen so many Muslims being targeted with violence. No one should discriminate against or oppress or be oppressed for their religious beliefs, nobody, so today we also remember all those who are not able to celebrate this holy day including Uyghurs and Rohingyas, and all those who are facing famine, violence, conflict and disease.

Ziba Murat recalls that in the minutes that President Biden was speaking, her mother Gulshan Abbas, who is a sister of Rushan Abbas and detained as a result of Rushan’s activism in the US, was on her mind, she said “As he was giving the speech I had tears and was quite emotional as I was thinking of my mother. During my personal encounter with the President, he was empathetic towards me. I also told the first lady about my mother’s situation and I was emotionally affected by how she had reacted to my mother’s case. My mother would help the weak, and care for them, and now it’s been almost 4 years she has been incarcerated in prison. She is innocent. I’m sad but hopeful,  I will not stop fighting for her release; my voice will be louder and stronger.”

The Eid reception allowed President Joe Biden to meet directly with the families of those imprisoned in China’s concentration camps. It was the first time that the President had the opportunity to meet an Uyghur-American like Ziba in person, to hear about the experience of the Uyghur genocide directly.

Executive Director of Campaign For Uyghurs, Rushan Abbas said “The Eid event was particularly meaningful because there were delegates from Muslim-majority countries and for the President to bring the plight of the Uyghurs in front of them is critical.  This would encourage them to take tangible steps to help save their fellow brothers and sisters. From the pressure raised in the Muslim world, we have seen, even if it is just for show, Chinese state media propagating Eid celebrations in Kashgar, hopefully these staged performances turn into real life very soon. I urge President Biden and his administration to continue to raise my sister, Gulshan Abbas’ case and the cases of all Uyghurs in China’s concentration camps.”

The US government needs to continue to step up its efforts into Ms. Gulshan Abbas’ case, as well as other Uyghur detainees in China’s camps. We hope other governments intensify their efforts to investigate China’s trans-national pressure on the Uyghur community all around the world. A clear signal needs to be sent to China that the Uyghurs are not alone and the world is paying close attention to the situation of the Uyghurs.