This Sunday, June 12, marks the fourth birthday that Dr. Gulshan Abbas will spend falsely imprisoned by the Communist Chinese government, as noted by Senator Marco Rubio on Friday, June 10. Secretary of State Antony Blinken tweeted last year on her birthday stating that she should be reunited with her family. 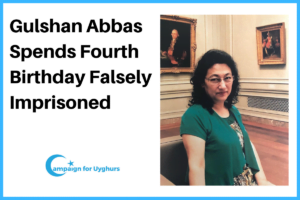 In September 2018, Gulshan Abbas was detained by the Chinese regime in retaliation for Campaign for Uyghurs (CFU) Executive Director Rushan Abbas’s activism. She will be 60 years old today.

Rushan Abbas participated in a panel condemning the Uyghur genocide and the CCP’s policies of oppression in East Turkistan at the Hudson Institute outlining the fate of her in-laws, who had all been detained. Six days after this panel, her own sister, Dr. Gulshan Abbas, was abducted by the Chinese government. As Gulshan’s case reached international prominence, the Chinese state media launched a disinformation campaign, accusing Rushan of inventing a relative.

In December 2020, CFU learned Gulshan Abbas was secretly sentenced to 20 years in prison, announcing the news in a joint press conference with the Congressional-Executive Commission on China. Wang Wenbin, spokesperson for the Chinese Foreign Ministry, confirmed this in a statement, stating Dr. Gulshan Abbas was charged for “terrorism”. Rushan and her family have had no contact or updates on Gulshan Abbas’s whereabouts or well-being.

Ziba Murat, Dr. Gulshan Abbas’s daughter who lives in the U.S., says “My mother could never be what they say she is, but the regime can’t see past her ethnicity, can’t see past her bloodline. She is a kind, soft-spoken, non-political person who only cared for her patients. She retired early due to health reasons. But retirement did not stop her from helping patients. She would still use her free time to help people from villages outside of town to come to Urumqi for hospital visits.”

Executive Director Rushan Abbas said “The Chinese regime’s abduction of my sister is a flagrant violation of her rights and is in line with their oppressive, genocidal policies to destroy my people. Gulshan Abbas is an innocent victim of their crimes against humanity and Xi Jinping’s Genocide. We must do more to consistently raise the case of people like my sister in the international community and the greater world. These gross injustices cannot be ignored.”

The CCP must release prisoners of conscience and hostages held to silence and coerce activists abroad, and dismantle their genocidal policies that have targeted Uyghurs with the intent to destroy and control their culture and identity. CFU urges the U.S. to continue to bring the case of Gulshan Abbas and other prisoners of conscience to their Chinese counterparts, and strengthen the protections for activists in the U.S. against transnational repression.