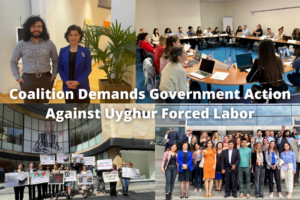 Meeting over these 3 days, discussing ways for EU governments and companies to end their connection with Uyghur forced labor, coincides at a time when the European Commission has proposed legislation to restrict the entry of forced labor goods into European markets. The draft proposal will officially launch in the EU September this year. This unity is one of the most important human rights movements of our time because it connects international anti-slavery groups, labor rights organizations, trade unions, religious organizations, investors and the Uyghur rights organizations from around the world. If there is a global movement to ban companies from profiting from Uyghur forced labor, then all governments and institutions must take concrete actions to end it. On May 11, CFU joined Uyghur groups and human rights advocates in Brussels, protesting  Zara to stop profiting off Uyghur forced labor.

Executive Director Rushan Abbas said, “One of the main purposes of this meeting is to tell Europeans there is Uyghur blood on their clothes. European companies benefiting from Uyghur forced labor should not tarnish their hands with Uyghur blood for their own self-interest. The Chinese regime is not only using Uyghur slaves in East Turkistan but they are also forcibly  moving them to inner-Chinese cities and continuing Uyghur slavery there as well. The US made laws to tackle Uyghur Slavery which will be implemented in June of this year, however,  the European Union member states have yet to legislate anything similar to  the Uyghur Forced Labor Prevention Act (UFLPA).  This is why we have come to Brussels, to urge EU member states to follow in the footsteps of the US.”

Citizens, parliaments and governments play a deciding  role in combating and denouncing international law abuses. European politicians have a responsibility to protect human rights and freedoms. The European government and politicians must condemn and impose legislation like the UFLPA. European citizens should not use products that are contaminated with Uyghur forced labor. Simply put, exploitation and forced labor should never exist  in the European market. Genocide is too steep a price to pay for profit.