The Office of the High Commissioner for Human Rights (OHCHR) has announced their upcoming six-day visit, including a stop in Urumchi, East Turkistan (AKA the “Xinjiang Uyghur Autonomous Region” by China). This long-awaited visit comes after continuous calls from human rights organizations, including Campaign for Uyghurs (CFU), for the High Commissioner to investigate China’s genocidal actions and  release the report on human rights conditions and violations in East Turkistan of Uyghurs and Turkic people. 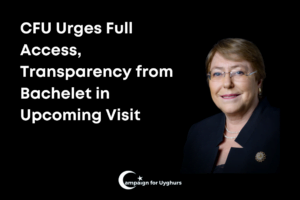 CFU reiterates the demands outlined in a multiorganizational letter to the OHCHR to show transparency in their visit, seek unfettered access, and to publish the human rights report  awaiting release since September. While the Uyghur genocide continues with little condemnation from the United Nations since 2017, Uyghur groups and their allies have been consistent in their demands for the UN to act.

A visit without unfettered access will yield no results beyond supporting the CCP narrative that there are no human rights violations happening in East Turkistan. Without transparency, human rights organizations are left to wonder about the trip’s validity and its ultimate goal. While the OHCHR is set to hold a press conference on May 28, after the end of its tour, much of the visit’s criteria are opaque.

There is also the danger of Bachelet’s visit propping up the Chinese regime’s narrative and carefully curated image of Uyghurs and East Turkistan. Already, there are reports that Chinese officials are warning Uyghurs not to speak with OHCHR members, warning them to “not divulge state secrets”. It is up to Bachelet and her team to ensure their reporting will not be swayed by Chinese propaganda and disinformation.

Uyghur activists were disappointed by Bachelet’s continuous silence and delaying the report. Executive Director of CFU Rushan Abbas said, “Commissioner Bachelet has delayed the release of her office’s report and her visit, extending the suffering of the Uyghur people and our wait for a light to be shone on China’s genocidal crimes in the largest global forum on Earth. Prisoners of conscience like my sister, Dr. Gulshan Abbas, have been imprisoned at the hands of the regime because of our activism. Bachelet did not meet with the victims’ family members nor the camp survivors prior to her upcoming visit. Thus, we have strong concerns for her visit. Bachelet must demand access to hostages like my sister and for their immediate release.”

Ultimately, it is critical that the OHCHR release their report on human rights in East Turkistan and of Uyghurs and other Turkic peoples. Without this report, the UN has been unable to credibly condemn China’s actions, and nations have remained unconvinced. The release of the report will force the world to act and shake the international community out of its stupor. If the Uyghur genocide is to end, it must be done through global effort and recognition.