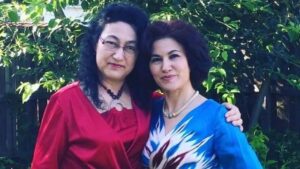 The world has understood. Through this absurd decision, the CCP is punishing her sister Rushan, for her brave campaign on behalf of the persecuted Uyghurs.

Relatives of Dr. Gulshan Abbas, the mystery of whose disappearance two years ago was solved for them abruptly this Christmas Day, are reeling from the worst possible tidings. US-based daughter, Ziba Murat, and sister, Rushan Abbas, who launched a tireless search for her sister in 2018. are distraught following the news from sources that have to remain anonymous, that Gulshan was in fact sentenced to 20 years imprisonment for terrorism-related offenses back in March 2019.

Having your day in court, and receiving just punishment for a crime you have committed is one thing.  But for a retired medical doctor who has devoted her life to healing the sick, to be the victim of a vengeful state is nothing short of spite. The family had thought last year that Gulshan had been admitted in one of the so-called transformation through education camps. But news of the twenty-year virtual life sentence has been a devastating blow.

Wang Wenbing, spokesman for the Chinese Foreign Ministry confirmed the prison sentence, saying that Gulshan had been sentenced for her crimes of participating in a terrorist organization, aiding terrorist activities, and gathering people to disturb the public order. He said that China is a “country ruled by law” and that unlawful and criminal activity must be “punished by the law.”

Ziba, who issued a plea on behalf of her mother published by Bitter Winter last year, speaking at a press conference co-hosted by Rushan’s Campaign For Uyghurs and the US Congressional Executive Commission on China, this week, said that the “preposterous” sentence by a state that “parades as a legitimate government,” would not silence her.

Rushan is convinced that her sister has been condemned as an example and a warning to those who dare to speak out against the CCP. Speaking to Bitter Winter in September this year, Rushan, who at the time had heard reliable rumors from relatives that her sister had been taken to a camp, said, “Six days after I spoke at the Hudson Institute in Washington D.C, both she and my aunt were abducted, although they live 1,400 km away from each other. This is no coincidence. My sister has committed no fault, and she is being arbitrarily held as a prisoner for 22 months. A prisoner without a crime.”

“Our mother has been punished because of us,” said Ziba, speaking this week on behalf of her and her sister who is also in the States. She feared for the safety of her mother, who had multiple health complaints and relies on medication that she fears will not be available in jail. “We will not be silenced, and will continue to bring this to light.” She called on the US government, the UN, and like-minded governments to amplify their voices and call for her release.

Rushan said that the thought her sister would spend the next twenty years in “a Chinese dungeon” because of her, was “impossible to bear.” “My free speech here in the US has cost my sister’s freedom.” 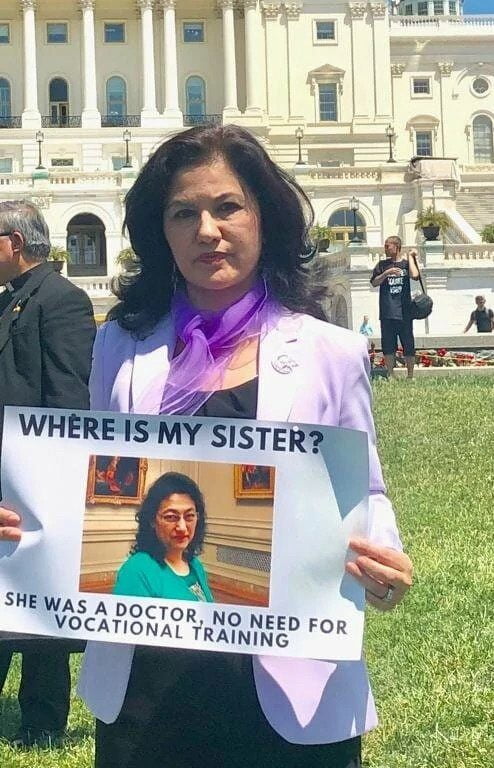 Rushan Abbas campaigning for her sister.

She begged the world to wake up to the atrocities perpetrated by the CCP before the Xinjiang situation deteriorated further. “I am at a loss to know how the rest of the world can continue to countenance the system,” she said. “We are failing in our duties as citizens of the world.” She reminded a silent and indifferent world that “its conscience was being tested.”

Nury Turkel, chairman of the Uyghur Human Rights Project in Washington, and a Commissioner to the U.S. Commission on International Religious Freedom (USCIRF), was shattered that a retired medical doctor who had “only done good,” a grandmother and one of the “least political Uyghurs” that he knows, and least capable of committing acts of terrorism of which she is accused, should be gone after by the CCP. “This violates China’s own counter-terrorism law,” he pointed out. “This is purely retaliation against US citizens.”

Kelly Currie, US Ambassador-At-Large for Women’s Issues, has been dismayed at the indifference of women’s groups around the world at the plight of Uyghur women who are victims of sexual abuse, mass sterilization, and the loss of their children to state-run orphanages.

Quoting a camp survivor, who had asked her tormentor why he was torturing her, receiving this simple reply, “because you are a Uyghur,” “the parallels here of the second World War’s camps are absolute,” she said.

US Congressman, Tom Suozzi, urged a mass education program of US judges, many of whom were still ignorant of the situation on the ground in Xinjiang. He flagged up the need to bring Uyghur asylum claims up to speed. Assessors needed to be aware that, “returning Uyghurs or Hongkongers to their homeland means a one-way ticket to a gulag or forced labor,” he said.

Congressman Jim McGovern, member of the US House of Representatives, was hopeful that the incoming Biden administration would prioritize Uyghur issues to facilitate expedition of the Uyghur Forced Labour Prevention Act, which has recently stalled in the Senate. “The Biden camp has already called this a genocide,” he said, optimistically. He regretted there was no easy answer in effecting change, but urged unity in pushing back on China, not because of enmity towards the Chinese people, he stressed. The US want a better relationship with China, he said, but not at the expense of “turning a blind eye to its atrocities.”

Wang Wenbing appeared unmoved and immoveable in his statement when he told US politicians to respect the court’s decision. He told them to “stop spreading rumors,” “cease their slandering and blackmailing China,” and to “stop using Xinjiang to interfere with China’s internal affairs.” 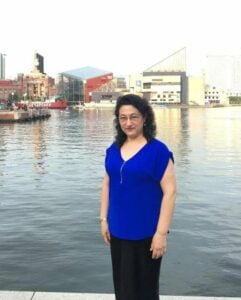 The Campaign for Uyghurs responded by begging the international community to show the CCP that it will face justice, rather than continuing to be rewarded for their “filthy and malign” actions. “They must be held to account for taking innocent people as political prisoners.”

Rushan Abbas called to task the international community, asking “if a country can imprison family members of foreign citizens, is this really the country you will choose to do business with?”. She continued by addressing leaders in the European Union who “feel comfortable trusting such a regime”, saying “I am holding you responsible for empowering them to commit these genocidal crimes. They are running concentration camps, normalizing slavery, and are punishing my sister for my exercising rights as a foreign citizen. It’s barbaric and brutal beyond words.”

Kelley Currie supporting the CFU, reacted in a social media post that, “Dr. Gulshan Abbas was sentenced to 20 years in a sham trial, because her American family members are telling the truth about CCP gulags in Xinjiang.”

Ziba said that their search for justice has not finished, and that news of the sentence has spurred them on. “Our heartbreak will drive us onward,” she announced. “We want my mother released.”