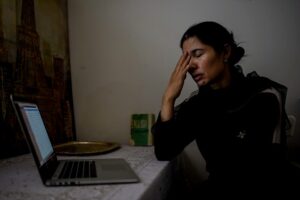 Yesterday, the BBC released their latest harrowing report on systematic rape of Uyghur detainees in China’s camps. Campaign For Uyghurs (CFU) has long raised these issues and has referred to the atrocities women face as government-sponsored mass rape since 2019. Like many who read the report and responded, we find it difficult to articulate the pain of having so much confirmed yet again in graphic detail by victims themselves.

“I read it and I’m shaking”. Ziba Murat, daughter of missing Uyghur doctor Gulshan Abbas, says she texted her friend who messaged her telling her not to read the report. She stated on Twitter that “As a daughter of an innocent Uyghur woman being detained, I want to ask if anyone still thinks it is fine to be bowing to China and turning their back on Uyghurs? That is equally complicit with those crimes.” Other members of the CFU team also responded. “I read half of it and my heart is so broken that I stopped in the middle.” said Akida Pulat, CFU Outreach Director, whose own mother, renowned Uyghur scholar Rahile Dawut, has been missing since 2017.  Program Director Babur Ilchi stated, “I read it this morning and I haven’t felt right since.”

The responses are telling, and point to the underlying truth: having these things laid out in the open reminds us all the more of the anger that the entire world should feel as leaders, academics, and business people make decisions and statements to downplay the atrocities. CFU Executive Director Rushan Abbas stated that the atrocities weren’t about “a hip cause or academic exercise. These are human lives.”

Yesterday, a professor at George Washington University published a piece in which he stated that the policies that the state department referred to in the press release regarding the designation of China’s crimes against the Uyghurs as genocide, “would take several decades to lead to biological extinction of the group” as part of his attempt to downplay the genocide.

Thomas Bach, President of the IOC, continues to publicly praise China. It is essential that the United States avoid taking an approach that can be viewed as “soft” on China, often disguised under the phrase “moderation” or “avoidance”. Uyghurs have no mechanism to avoid this genocide.

So where does this leave us?

We hope that leaders and individuals across the world will sit with this painful reality, and search deep in your conscience to respond. The necessary actions have been given, not by individuals who stand to financially benefit from a “moderate” approach, but from Uyghurs themselves, who are bearing the full, hellish burden of the world’s cowardly, complicit approach.

To read the CFU report, “Genocide in East Turkistan”, which highlights the sufferings of camp victims, click here.