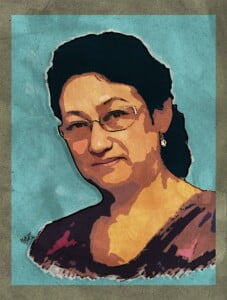 September 11 marks three years since the disappearance of Dr. Gulshan Abbas, sister of Campaign For Uyghurs (CFU)  Executive Director Rushan Abbas. Three years since her daughters have heard her voice. Three years deprived of her right to live a peaceful life as the peaceful person that she is. Three years held prisoner to punish her family members for speaking the truth about the Chinese regime’s genocidal crimes against the Uyghurs.

To mark this occasion, Gulshan’s daughter, Ziba Murat, has launched a campaign calling for her mother’s release on social media. We encourage all to participate in this campaign, calling for action on Dr. Gulshan Abbas’s detainment. Today is a sobering reminder that this genocide, for all of its geopolitical implications and global impacts, is fundamentally a destruction of families and people. Behind every condemnation and every rally is a mother, a daughter, a son, or a father who has had their life stolen from them. The face of this genocide is made up of people like Gulshan.

Dr. Rishat Abbas, Senior Advisor of the World Uyghur Congress and Honorary Chairman of the Uyghur Academy, said of his sister’s disappearance that “It is with a very heavy heart that another anniversary of this day passes. Each year that goes by was stolen from Gulshan and from her family as irreplaceable. Today, as all days, I pray for the safety of my sister and for all the Uyghurs who have been made victims of this brutal genocide.”

Her sister, Rushan Abbas, Executive Director of Campaign For Uyghurs (CFU) said “This day marks one of the greatest horrors of my life, and yet what I feel is nothing compared to what my sister is being put through. When I close my eyes, I see her face, her smile, and it pushes me further in the fight for justice. I refuel my strength with the love I have for her and I hope that in my fight for her, the collective attention of the world is also centered on the Uyghur people. I will mark this day attending the Uyghur tribunal, and the significance of this platform for justice cannot be missed. My sister is many things: an Uyghur, a mother, a doctor, a sister, and a friend. None of these things are a crime, rather, they are markers of a brilliant and wonderful person. For her, and for all Uyghurs, we must fight on.”

Dr. Gulshan Abbas’s case has been recognized by multiple government officials in multiple countries, and has been lifted up by activists around the world. It is one story of millions that illustrates the lengths to which the CCP will go to obscure and continue their genocidal policies in East Turkistan. The human cost of this genocide grows higher every day.

CFU thanks all those activists and officials who have worked to free Dr. Gulshan Abbas, and have brought her case to international attention. Now further action is needed more urgently than ever before. For all that that this case represents, and for the future of the free world, we must act swiftly and decisively to curb this genocide, to end forced labor, to close the camps, and to bring our brothers, sisters, mothers, and fathers home.