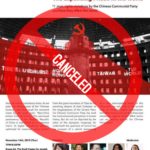 Mr. Sachs, your opinion piece seems to be based on one primary flawed assumption: that China is telling the truth, and consequently that any mistakes that were made in handling the virus outbreak can be attributed to blunders and an inauspicious wish to avoid disturbing the Chinese New Year celebrations. I wonder why you do not offer the same type of excuses for our own government.  Whether or not President Trump and other officials should also be held accountable is a point that I might clarify is not antithetical to holding China accountable. Why must it be either/or? By the same points that lead you to vilify the actions of President Trump, we must likewise vilify the Chinese Communist Party’s suppression of truth and failure to act to protect the global community.

By now, citizens around the globe have heard of Li Wenliang, the ordinary Chinese doctor turned whistleblower, who eventually succumbed to COVID19. You referenced him as well. But have you heard of the others? The ones China has not exonerated, many of whom are still missing? It is quite convenient to clear the name of someone once they are dead and cannot continue to speak out against injustice. If he had lived, might he have shared more about a fact that China has continued to conceal from their own people: that the coverup was not primarily committed by local Wuhan government officials, as the Party has presented all along, but rather, that it was sanctioned by Party officials in Beijing?

Your article begins by assuming that the United States government is pursuing accountability for China by the motivation of their jealousy of China’s “success”. I am not sure which successes you are referring to, perhaps you were referring to their “success” in implementing a concentration camp system for Uyghurs in East Turkistan, officially referred to as Xinjiang Uyghur Autonomous Region? They were remarkably successful in implementing the slavery of 3 million people based on their ethnicity without the outcry of the “progressives” in Western Society.

I am also confused by your need to associate all people who wish to hold China accountable as “right-wing allies”. This is quite a large assumption to make and is rather insulting to those Chinese independent journalists who have risked everything to state the same thing: that China committed a massive coverup. The need to label anti-CCP viewpoints as “right-wing” is concerning in and of itself. It frames your argument as being extremely driven by the point of partisan disagreement…an interesting approach to take as the entire globe, not just American Democrats and Republicans, struggles as these same questions are raised by citizens, politicians, and government officials worldwide.

You reference the Five Eye Findings and even Dr. Fauci as “pouring cold water” on the claims that the virus originated in a Wuhan lab. I fail to see how a failure to present evidence automatically discounts this likely explanation, especially when Dr. Fauci, to my knowledge, is not in the employ of the international intelligence community and seems to be commenting above his paygrade and more importantly that China has refused access to its labs to everyone, including the World Health Organization. This very refusal to submit evidence, particularly samples from the earliest cases, is in and of itself evidence. What is the definition of a cover-up?

The associations you made regarding McCarthyism are particularly enlightening as they draw to mind the images of a Cold War. It seems you also recognize that this is happening. By the same token calling to mind the hysteria associated with this, you are also acknowledging the truth…that we are in a Cold War of sorts with China. The discussion around McCarthyism has not founded upon the premise that the threat of communism was not real, but rather that the hysteria attached to supposing everyone to be an enemy of the state resulted in severe consequences. Then we are agreed. To assume that everyone who holds a certain viewpoint should not be lumped in as an enemy of the state is quite essential to the values of democracy….and unfortunately, China does not share in this viewpoint, and thus are not a trustworthy source.

You state that “perhaps we will learn that the earliest human cases were not even in Wuhan at all and were brought to the Wuhan market by an infected individual traveling from Western China.” It seems you know something we do not, Mr. Sachs, and it is ironic that this is included as speculation when you criticize President Trump and Secretary Pompeo for continuing to focus on the narrative that China is responsible for. China has suggested that the virus was brought to China from the United States during the joint military games. Perhaps you would be well advised to stick to their narrative or can write another opinion piece focusing on this groundless accusation.

I find it interesting that you include that many countries have not cut business with Huawei….it would seem this opinion piece also serves as a convenient way to protect China’s economic interests.

I want to close by asking, Mr. Sachs, do you believe that Trump should be held accountable for a failure to implement certain policies? Which ones? A failure to implement authoritarian rule early on with the virus outbreak would mean he was too conservative in his response, certainly. Or perhaps might the blame lie within a failure by American citizens to comply with social distancing and a failure to accept restrictions on our personal freedoms? Mr. Sachs, either way, China’s refusal to share samples, their suppression of the truth about the number of cases in China, and their criticism of the United States closure of the borders, resulted in an environment that made the average American citizen unaware and unwilling to accept measures that might have further prevented the spread. Even now, in the midst of a catastrophic number of deaths in the United States, we are arguing about why we shouldn’t blame China and presenting the opinion that they didn’t do anything wrong by hiding information…so how can we criticize our government? If you feel that these were early missteps by the Communist Party and that the coverup is not ongoing, I ask you to look at the second wave of the virus outbreak, primarily in Heilongjiang province….if you do not find much information about that then I rest my case. The question is not whether to demand accountability for the United States or for China. We must demand transparency by ALL, and most essentially those who denied the entire globe the chance to have the information they needed to get a head start on fighting the virus.

Mr. Sachs, there are so many flaws in the basis of your opinion piece that I find it difficult to respond to all of them, but I will summarize it thus: China is not playing by the same rules that we are. Mr. Sachs, you are free to publish these opinions without fear of reprisal. But this same right is denied to Chinese citizens. And for this fact alone, we can, in fact, be certain that China was lying, continues to lie, and will always continue to lie if the Chinese Communist Party is in power.

I suspect, Mr. Sachs, that you can relate to the heroic Chinese citizens, who continue to question the party line, better than you let on….after all, from a position at Columbia University, for example, perhaps you have the same things to risk that they do? Job security under the Chinese Communist Party is a tricky thing, isn’t it?