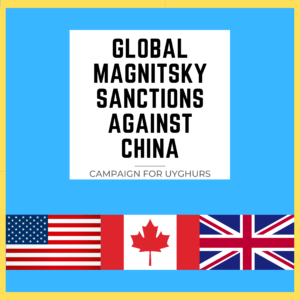 Campaign for Uyghurs was pleased to serve as signatory on a letter with Human Rights First and other organizations that has been sent to the foreign ministry and treasure officials of the United States, United Kingdom, and Canada in order to encourage the implementation and integration of further Magnitsky-like sanctions.

The letter noted that “..the impact and perceived legitimacy of such sanctions will be bolstered if coordinated and implemented in conjunction with the governments of the United Kingdom and Canada. We encourage your governments to prioritize multilateralization of targeted human rights and anti-corruption sanctions, which among other benefits will have the manifest impact of expanding the reach of travel restrictions and asset freezes.” This, in turn, will increase the costs for each sanctioned individual and entity to continue committing human rights abuses or acts of corruption, in the Uyghur Region or elsewhere, and serve as a more effective deterrent.”

It is the sincere hope of Uyghurs and human rights activists that cooperative efforts will continue the momentum of what has already been set in motion by the global leadership demonstrated by those officials who have committed to taking on the threat of the Chinese Communist regime.

CFU Executive Director Rushan Abbas stated that “The integration of efforts to address the global threat that has clearly demonstrated its disregard for humanity is essential. May continuing action be swift and firm. It is no exaggeration to remind that the future of our world is at stake.”