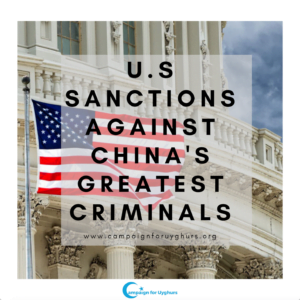 Campaign for Uyghurs receives the news of U.S. Government sanctions against four of the Chinese government leaders responsible for orchestrating the genocide in East Turkistan with bittersweet sentiments.

It is deeply sobering that there is a need in this modern age to address individuals whose jobs should be to protect human life and promote peace, in this manner. While this is an incredibly important step to hold a few of the greatest criminals in the world accountable, it is part of a necessarily longer string of actions.

Chen Quanguo has inflicted immense pain and suffering upon millions of innocent Tibetans, Uyghurs, and even the general public in China, and this is but a small portion of the punishment that he deserves. These sanctions are a clear indication to the Chinese government that their human rights violations will not be left unchecked and that they are not above the law, and it is extremely important that other nations follow the example of the United States in enacting sanctions against these individuals.

The sanctions brought forth today against Chen Quanguo, Huo Liujun, Wang Mingshan, and Zhu Hailun should remind the world that the Chinese regime worships only money and tyranny, and therefore we must use the language that these pathetic individuals speak in order to end their ability to carry out such evil actions.

History will remember these so-called “officials” as the sick, deranged, genocidal terrorists that they are, but at present, we need the entire international community to replicate and multiply similar actions in order to force the Chinese regime to halt its annihilation of the Uyghur people. For the sake of humanity, more must be done. For the sake of the future, we must stand united against a common enemy of common decency and human values. And finally, for the sake of the cause of justice, we should sacrifice all to prevent any more loss of human life and human dignity.