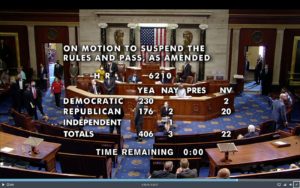 On March 11, 2020, CFU was privileged to speak at the CECC roundtable where this legislation was introduced. At the roundtable, CFU’s Executive Director Rushan Abbas raised valuable questions on forced labor, saying “U.S. law requires Global Magnitsky sanctions on individual offenders and prohibits any trade-in products made with forced labor, so who is preventing the enforcement of the law? Has Xi Jinping been granted veto power over U.S. laws?” Today’s passage makes clear that the power to do good still lies with the United States, and it has been a bittersweet pleasure to see this bill’s continuing push into law.

Congressman Jim McGovern, the sponsor of the bill, stated that “The evidence of systematic and widespread use of forced labor in Xinjiang is astounding and irrefutable…it is time for Congress to act.” There is bipartisan willingness of U.S. lawmakers to engage on stopping this egregious genocide, as is being increasingly acknowledged by lawmakers like Representative Chris Smith, who urged Congress to “Make no mistake, this is Xi Jinping’s genocide.” As such, this is a monumental action in pursuance of the freedom of the Uyghur people. Congressman Tom Suozzi stated the bill’s importance, asserting that “We really need to wake people up out of their torpor…It’s hard to imagine that in today’s world, forced labor is happening and we know about it…This is going to have a big impact.”

Just days after Ms. Abbas testified at a hearing for the House and Means Trade Subcommittee, she received news of the bill passage with delight, stating that “Each decisive action in the United States to address this genocide gives hope to the Uyghurs and to all those who love and value freedom. It sends a message to the Chinese regime, and to the world, that the normalization of slavery will not be tolerated by civilized nations. Those who ignore humanity in order to reap the benefits of Uyghur suffering will not profit for long.”

American companies’ cooperation with modern slavery is unacceptable to consumers and all those who are concerned by the Chinese regime’s horrific crimes against humanity. We hope that this legislative response, when combined with continuing public awareness, will set a positive precedent for continuing accountability. CFU calls on companies and retailers to take appropriate actions to extricate themselves from complicity with genocide preemptive to legal mandates.

Additionally, CFU urges the U.S. Senate to act swiftly to pass the Uyghur Forced Labor Prevention Act, and it is our sincere desire that the United States and other democratic countries will continue to make addressing complicity in Uyghur slavery a top priority. As has been addressed by many activists and legislators, the inability to perform due diligence in China as a whole necessitates this act as essential to what must be a broader plan to confront the authoritarian monster that threatens our world.