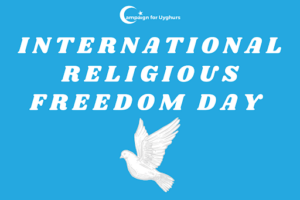 Today, Campaign for Uyghurs (CFU) joins the global community in celebrating International Religious Freedom Day. As this epoch of human existence continues to shine new light on the possibilities afforded to our world, it is more critical than ever that we remain vigilant in the protection of religious tolerance. Across the globe, advances are being made each day which challenge the very concept of human limitation. Yet, for countless communities and religious groups, the fight for respect and existence continues on as a basic struggle for human dignity. This is especially true of communities threatened by the growing power of the Chinese Communist Party, which is visible each day in the ongoing Uyghur Genocide.

Executive Director of Campaign for Uyghurs Rushan Abbas offered in recognition of this day that “It is of utmost importance that every human being looks to their fellow person as an equal, deserving of the same basic freedoms guaranteed to themselves. These rights to believe what we wish and practice our faith as we believe are not given by any government or person, but endowed to each of us on the basis of our very existence. Today in East Turkistan that birthright is being trampled upon. The Uyghur genocide represents a complete rejection of the basic principles of democratic and civil liberty. As part of their ongoing war against the Uyghurs, the CCP has declared war on their Islamic faith. They have desecrated mosques, announced planned revisions of holy texts, and punished displays of worship. This is an intolerable evil, and it represents a fight that involves every person no matter their race, culture, or faith. Today as all days, we declare unequivocally that we will not stand for such atrocities.”

The bedrock of any democratic system is the tolerance of belief. Absent this critical component there can be little hope for civic integrity or a leveled basis of opportunity. East Turkistan and the Uyghurs living there are facing nothing less than an existential threat to their physical and cultural existence, in short, a genocide. Today, we remember all those times the international community has faced similar threats to other threatened groups. We recall with regret what the international community has allowed to happen, and we must give our word as one people that it will not be allowed to happen again. There are many ways to fight back, including participating in the ongoing campaign to boycott the 2022 Beijing Olympics. While religious intolerance still is present, business-as-usual operation cannot be allowed.