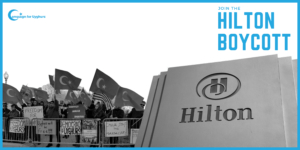 Yesterday, the Council on American-Islamic Relations (CAIR) launched its global Hilton Hotel boycott campaign with a press conference in Washington D.C. Campaign For Uyghurs (CFU) has been honored to be part of this important initiative together with the World Uyghur Congress, Uyghur Human Rights Project and more than 40 Coalition Partners. Furthermore, CFU applauds CAIR for spotlighting the atrocious actions of Hilton to build a hotel on the site of a demolished Uyghur mosque in East Turkistan.

Speaking at the press conference, Mr. Nihad Awad, the Executive Director of CAIR, remarked that “We have given Hilton Hotel more than 4 months to rethink, to reconsider…we negotiated with them indirectly to no avail. We gave them until yesterday to pull out from this project because they are complicit in genocide, and they decided to put profit over values.”

Hilton has carried on with the project, deliberately ignoring the travesty of the assaults on Islam in East Turkistan and the genocide of the Uyghur people. This blatant disrespect for the Muslim faith is in line with other alarming developments. Nearly all aspects of Islam are outlawed. Mosques, when not destroyed, are being turned into night-clubs and pig sties. Uyghur women are forced to marry Han Chinese men out of fear of being detained and labeled “extremist” if they refuse. Most horrific of all, they are facing mass rape, forced abortions, and forced sterilizations. All of these policies are part of a coordinated effort to wage war against the faith of the Uyghur people. The reality is that this is an attack on religious tolerance and religious freedoms globally, not just in East Turkistan.

CFU Executive Director Rushan Abbas said, “Our faith is not an obstacle to be bulldozed! The Uyghurs are not an obstacle to be erased! Profiting off of this genocide is in opposition to the values of humanity! The conscience of the world is at test with this genocide and Hilton is failing it! Today we are calling for a boycott of Hilton for this shameful and bare opportunism, and we demand that companies do the bare minimum: refuse to make money off of the genocide of an entire people group.”

Campaign For Uyghurs calls on every person to join in the campaign and sign the petition initiated by CAIR to pledge to boycott until Hilton recognizes that this new construction will serve as nothing but a monument to the cruelty of the Chinese regime.  We must carry forward with a full boycott against Hilton and Hilton branded hotels until Hilton ends its complicity in the Uyghur genocide. This will send a message to all companies around the world that are considering continued investment and engagement with this regime, that we will not tolerate it.