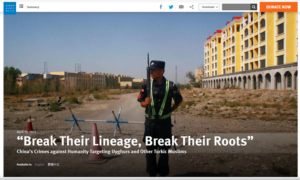 Today marks another victory in the fight for justice for the people of East Turkistan as Human Rights Watch (HRW) released a detailed report and condemned the Chinese Communist Party’s genocidal actions as crimes against humanity. This report follows the US State Department and Newlines Institute’s determination of genocide and crimes against humanity. Campaign For Uyghurs (CFU) applauds HRW’s report and particularly the many recommendations for accountability for the Chinese regime contained therein.

HRW’s report “sets forth the factual basis for that conclusion, assessing available information about Chinese government actions in Xinjiang within the international legal framework.” Under the framework of the ICC’s Rome Statute, HRW has found that crimes against humanity have been committed, as they are “widespread” and “systematic” in their implementation and scope. These crimes include imprisonment and deprivation of liberty, persecution of an ethnic group, torture, murder, and inhumane acts including forced labor and sexual violence.

The recommendations laid out by HRW address the Chinese regime, the United Nations, and concerned governments. The recommendations laid out include an immediate end to human rights violations such as mass detention of the Uyghurs, as well as allowing a full investigation to be conducted. It recommends the UN set up a commission of inquiry and exercise independent monitoring and reporting via the high commissioner of human rights. Finally, it recommends concerned governments apply targeted sanctions against individuals and entities involved in crimes against humanity, and adopt business advisories against human rights abuses in Xinjiang, including forced labor.

In response to the immense news, CFU Executive Director Rushan Abbas stated that “HRW’s report further confirmed the CCP’s genocidal crimes against humanity, and it is crucial at this moment. As Beijing is spreading propaganda videos and disinformation to deflect from these atrocities and trying to justify them with lies, it should be crystal clear to the world that what the regime is doing is morally bankrupt. It is time for the international community to take action, following the recommendations from HRW and many other human rights organizations.”

The parliaments of Canada and the Netherlands have passed motions recognizing the Uyghur genocide. The Subcommittee on International Human Rights of the Standing Committee on Foreign Affairs and International Development in Canada released a report on March 12, 2021 concluding China’s actions amounted to genocide and offered recommendations on how to help Uyghurs and end the crisis in East Turkistan.

With each acknowledgment of the reality of the crimes against the Uyghur people, we are one step closer to justice, but there is a long road ahead.

To donate to continue the work of Campaign For Uyghurs, please click here.