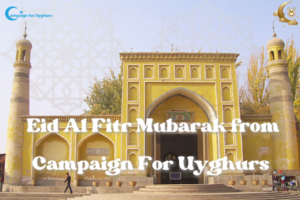 Campaign For Uyghurs (CFU) would like to wish our Muslim brothers and sisters around the world Eid Mubarak! As Ramadan for 2022 comes to a close, almost 2 billion Muslims around the world are celebrating a blissful occasion of spiritual revival. This holy day marks the conclusion of fasting and the commencement of a celebration of life and faith. Throughout these celebrations many will give generously to the poor, and spend this time in worship. Here at Campaign for Uyghurs, we urge everyone that in both of these actions you keep the Uyghur people at the center of  your prayers and your thoughts on how to take action to defend your faith while the Chinese regime is waging war on Islam. All Muslims, wherever you may be, share a common belief with those that the tyrannical Chinese regime has seen fit to oppress to the point of extermination, making their very faith an offence while waging war on Islam.

Today, for millions of Uyghurs, it is another ‘Eid’, without ‘Eid’, without being able to take part in regular religious activities, and without the normal traditions of marking this holy day in Islam. Even though it is the Uyghur Muslims who are being targeted by China’s repressive policies at this point, this should be seen as an assault on all Muslims. The same repeating shadow looms over these jubilant celebrations, as it becomes clearer that the genocide being committed in East Turkistan is an eradication of Islam, and those that practice it.

Executive Director Rushan Abbas, today said “The People’s Republic of China, like every year during these holy times, will depict Uyghurs as patriotic by forcing Uyghurs to go to mosques to attend flag-raising ceremonies, sing the Chinese national anthem, and then pray and dance to create a veneer that suggests Uyghurs are happy and have religious freedom. Until China actually closes the concentration camps, emancipates all Uyghurs,  guarantees freedom and survival rights to the Uyghurs for its genocidal policies and allows an unfettered international investigation, which for months, I have called on the UN High Commissioner Michelle Bachelet to conduct as well as release her OHCHR report on human rights violations by the CCP on Uyghurs, no one should accept these potemkin performances of happy and free Uyghurs.”

The Chinese regime has openly declared that practicing Islam is a mental illness, and have hidden their agenda to abolish religion under the pretext of fighting extremism. They have weaponized surveillance technology as a means of tracking Muslims. Mosques are being systematically destroyed, and in the concentration camps Uyghurs are forced to abandon their faith and traditions. Any authority that sees Islam as a threat to be removed is not only in desecration of international human rights, but is a threat to everywhere Islam is practiced.

It is very important that we observe Eid al-Fitr as a time of global unity with all practicing Islam. That unity is our best means against injustice and discrimination, and it is an avenue for challenging those dictatorships that commit death and destruction to those societies based on their faith and culture. It is incumbent upon all to stand together as a solidifying force against the genocidal Chinese regime that has waged war on Islam by trying to annihilate the Uyghurs.