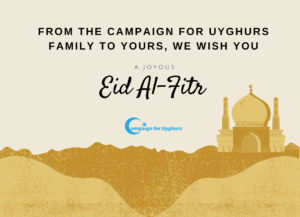 Campaign For Uyghurs (CFU) wishes our Muslim friends and allies Eid Mubarak! As Ramadan draws to a close, almost 2 billion Muslims across the world are celebrating a joyous season of spiritual rejuvenation. This holy day marks the end of fasting and the beginning of a celebration of life and faith. Many choose to mark this day with special offerings to those in need, and with dedications of prayer to Allah. Here at Campaign for Uyghurs, we ask that in both of these actions you keep the Uyghur people in the front of your mind and your prayers. Our Muslim brothers and sisters around the world share a common faith with those that the Chinese regime has seen fit to persecute to the point of genocide, making their very faith a crime while waging a war on Islam.

Today, millions of Uyghurs will go without celebration, without engaging in normal religious activities, and without personal ways of marking this sacred day in the Islamic faith. Though the Uyghur people have been singled out, the attacks on Islam made by the CCP are an attack on all Muslims. A shadow grows over these joyous celebrations for yet another year, as it becomes more and more clear that the genocide being perpetrated in East Turkistan is a genocide against the Islamic faith, and those that practice it.

Rushan Abbas, Executive Director of Campaign for Uyghurs, stated “It is of tremendous importance that we view the celebration of the Eid al-Fitr as a time of solidarity around the world with all those who practice Islam. That solidarity is our greatest weapon against injustice and discrimination, and it offers a path for confronting those regimes that would do harm to communities based on their faith and culture. We can, and must, stand as a united power against the genocidal Chinese regime that has targeted Islam through the Uyghurs of East Turkistan.”

The Chinese regime has announced openly that the practicing of Islam is a mental disease, and have hidden their agenda of eradicating the religion under the pretext of “fighting extremist activities”. They have weaponized surveillance technology as a means of tracking followers. Mosques are being systematically destroyed, and inside the concentration camps Uyghurs are being forced to renounce their faith and culture as Muslims. Any government that views Islam as a threat to be eradicated is not only in violation of international human rights, but is an active threat to everywhere Islam is practiced.

CFU Program Director Babur Ilchi stated “On this day, as we celebrate and give thanks for all the things Allah has blessed us with, we must pray also for strength. We must ask for the resilience and courage necessary to speak out on behalf of our Uyghur brothers and sisters who are not able to practice their faith openly.”

Today, we are all one people united in faith and love. Let us use this power to demand a better world and stop Chinese regime’s war on faith. We can, and must, demand an end to the genocide in East Turkistan. We must do this not only for the Uyghurs, but for Muslims everywhere. This is critical in order to preserve a world with freedom and democracy for all.

To donate to support the work of Campaign For Uyghurs, please click here.