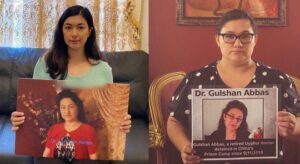 (Abdulhakim A. Idris) When there is a disaster somewhere, this sentence often comes out of the mouths of first aid teams and victims during the search and rescue operations which search for survivors.  “Does anyone hear my voice?” This is also the hope of those who are caught in the middle of a disaster calling to return to life, to make this voice heard. Today, the Uyghur people in East Turkistan, which is occupied by the Chinese Communist regime, are shouting to the world, “Does anyone hear my voice?” Unfortunately, very few people ‘take a pulse’ when it comes to this genocide that is resemblant of the work of the Nazis.  An Uyghur retired medical doctor’s daughter, Zamira Murat, and her sister Ziba Murat are knocking on the doors of the international community each and every day to reach those who can hear their voices to alert them that their mother, an ordinary person, has been detained and sent to concentration camps for being an Uyghur. Today, on World Human Rights Day, at least today, the international community must stand up against the genocide committed by the Communist dictators in East Turkistan.

One day, we saw one of our friends in Istanbul a while ago, and he was speaking about something for a long time on the phone. It seemed as if the other person on the line did not respond at all, but he was constantly talking. My other friend, who also noticed this situation and knew him from there, immediately explained the situation to me, “His mother is ill. He calls every day to tell his mother, what he has done, even though his mother will never answer”. It is a great blessing to be able to call a mother even though she doesn’t hear anything from the caller. The value of a person being able to call his mother, even if she cannot speak, was not fully valued at that time. The persecution of Zamira Murat’s mother and other Muslim Uyghurs, who can not even call their mother, not even to let her know that she has a newborn granddaughter, is fully comprehended with all its painful reality in light of this memory.

Four years ago, after the arrival of her first baby, Zamira Murat sent off her mother to her homeland, East Turkistan, in the hope that she would complete a few things in the country and come back after a while. While her mother was with her, she was making plans for the future of her newborn baby for growing up and going to kindergarten, etc. But these bright plans and beautiful moments of hope for the future have been shattered by the cruel Chinese government. Zamira Murat experienced the horror of her mother being taken during her last month of pregnancy for her second baby. Because of the trauma, she delivered her baby a few weeks early, 2 weeks after her mother’s disappearance. Zamira emphasizes the excitement of the newborn baby was overshadowed by her innocent mother’s abduction. The reason for this abduction was that  Rushan Abbas, her aunt, the sister of her mother and the founder of the Campaign for Uyghurs, spoke against the Chinese Communist regime and advocated to stop the genocide in East Turkistan.  To this day, her repeated calls to her mother on the phone have been unanswered. She cannot even find out where she is, let alone hear her mother’s voice. This torment has continued, stretching the first few days, then into months, and now it has been more than two years.

In East Turkistan, which the communist regime has turned into a prison with physical and virtual walls, no one can reach anyone who can know where Zamira’s mother is. Ziba and Zamira have asked everyone that they can reach, “Does anyone hear our voice?” But there is no answer because, for the Uyghur Muslims on whom the brutal communist regime unleashed its full brutality, the world has collapsed just like in a disaster.  The circumstances don’t allow anyone to reach them, nor allow them to reach anyone else.

On the one hand, she was anticipating the birth of her child, and, on the other hand, the worry of “how is my mother” surrounded all her thoughts.  After her first child was 2 years old, her second daughter of Zamira Murat was born. A great excitement like this normally means great happiness for a young mother. But a sad shadow immediately fell to shadow this excitement and happiness, because the first person who should share in this happiness is her mother, Dr. Gulshan Abbas.  Although more than 2 years have passed since Gulshan Abbas was abducted, there is still no news. Where is she being kept, whether or not she was sick, in prison, in a concentration camp, or a  slave in a forced labor facility like other Uyghurs? All these questions have no answers. Those who need to answer are ignoring the scream “Does anyone hear my voice?”  Twenty-one months after her disappearance, news came from a former staff member of a hospital where her mother worked, confirming that she was in a concentration camp. A bitter joy, at least in life, she thought to herself that if God wills, he will get rid of this evil one day and she will give her mother the good news of a new grandchild. The communist dictator also says “we are open to dialogue” through its representatives abroad. Well then, Zamira Murat and her family rightfully ask “Where is our mother?” Again, no answer. Instead, the Beijing regime is making false propaganda on the internet and through its hitmen on social media is trying to attack Rushan Abbas and discredit her work.

Before the eyes of the whole world, what is this regime that denies the truth? The Chinese regime lies to the world that Gulshan Abbas and other Uyghurs haven’t suffered any mistreatment by the government and that they are going through vocational education. A retired doctor, who speaks Chinese as well as a person, who follows the rules and laws. What training does Dr. Gulshan Abbas need? Of course, there is no training, Zamira Murat’s mother is a human being sent to concentration camps for revenge.

In fact, there is only one explanation for everything, the sino-colonial Chinese regime has identified the Uyghur Muslims in East Turkistan as obstacles to their ambition to dominate the world in the new era.  In order to eliminate this human obstacle, the Chinese communist regime is committing all crimes against humanity on our watch. Today, on the occasion of World Human Rights Day, it should be reminded that it is up to all people in the world to break this cycle of persecution and stop the current active genocide. Just like in the message Zamira Murat shared with her mother’s photo on social media recently, “Where is our mother?” The answer to the question should be answered on behalf of all Uyghurs and their voices should now be heard.