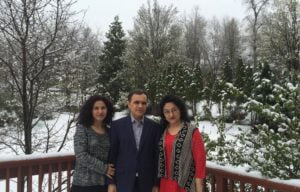 Dr. Abbas is a retired medical doctor, a peaceful person who lived a life of service to others, speaks fluent Mandarin Chinese, and has only ever traveled abroad to visit her family in the United States. Her case is particularly important as a very clear representation of the realities of what is happening to the Uyghurs.

In a panel hosted by CFU on September 10th, Ambassador Kelly Currie, the United States Ambassador-at-Large for Global Women’s Issues, stated regarding the atrocities in East Turkistan that “We haven’t seen anything like this in any other place in the world. It’s just so insidious.” The daughter of Dr. Abbas, Ziba Murat, stated “My intention has never been to fight with China or the world systems, but now I am left to ask: what does it take for a daughter to be able to hug her mother? Whatever it takes, I will do it. And I ask that you join me in doing so.”

Dr. Rishat Abbas, Senior Advisor for the World Uyghur Congress and Campaign For Uyghurs stated, “The refusal of the Chinese Communist regime to provide information to Gulshan’s family and the millions of Uyghur families regarding the detainment of their loved ones gives all the proof needed that this is genocide being carried out with evil intent as the regime blatantly lies and denies in support of its goals to exterminate the Uyghurs.”

As the regime continues in its extrajudicial, genocidal crimes, there should be no consideration of giving them a seat at any table politically or economically. The China of today is not the China the international community had hoped, and until families like that of Dr. Abbas are released from this torment, the Chinese regime should be cut off from the civilized world.

Campaign for Uyghurs calls on the international community and its leaders to confront China on this genocide and force them to release the three million Uyghurs unlawfully detained in concentration camps. We must demonstrate solidarity and unity in this endeavor and fight against these atrocities.