Campaign for Uyghurs (CFU) is concerned about the latest statements made by the UN High Commissioner for Human Rights. Michelle Bachelet said that her trip to China and Uyghurs’ homeland is not an “investigation” while speaking to diplomats today. To turn this landmark visit to China into a promotional tour would be a mistake that tarnishes the reputation of the Office of the High Commissioner for Human Rights (OHCHR) and leaves the Uyghurs facing genocide at the hands of China to struggle alone. 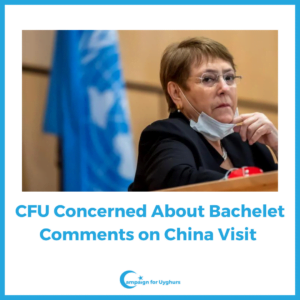 Executive Director of CFU Rushan Abbas said, “I am, and have been, disappointed by commissioner Bachelet’s actions and statements regarding China and the atrocities committed against my people. After continuous delays in visiting the Uyghur people and in releasing the OHCHR human rights report, this is another blow to the confidence of human rights activists in the UN’s ability to faithfully protect the Uyghur people from the CCP. What Bachelet does will set the tone for the UN’s actions on Uyghur genocide. I reiterate the calls made in letters to the commissioner previously to be transparent, demand unfettered access, and release the report on Uyghurs as soon as possible.”

CFU urges the high commissioner and her team to use this visit to observe the true nature of China’s genocide and its impacts against the Uyghurs and other Turkic people. Without an objective eye and an intent to see through disinformation and propaganda, the OHCHR risks promoting the Communist Chinese Party’s narrative and further slowing down any significant action by the international community to end these atrocities once and for all.