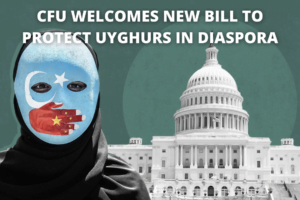 Campaign for Uyghurs (CFU) welcomes the new introduction of the Uyghur Policy Act. The Uyghur Policy Act aims to increase U.S. support for the Uyghur diaspora in the United States and other countries, as well as to advocate for improving the conditions of Uyghurs suffering genocide at the hands of the Chinese Communist Party (CCP).

The CCP is carrying out a brutal campaign of genocide and human rights abuses committed against Uyghurs and other Turkic groups. The United States cannot be silent in the face of such horrific abuse. This new legislation will help increase awareness and advocacy for Uyghurs once passed into law and implemented.

The bill would direct the U.S. government to build a comprehensive strategy making the Uyghur genocide a key focus in diplomatic meetings with CCP officials and in the UN, to oppose motions preventing consideration of issues related to Uyghurs. It would also establish Uyghur-speaking Foreign Service Officers (FSO) in countries with Uyghur diasporas, as well as the mission to China to greater support these populations.

CFU Executive Director Rushan Abbas said today “I hope the US government can pass this critical bill into law as soon as possible which would create a comprehensive strategy to raise international awareness of the genocide of Uyghurs, enable the U.S. State Department to respond to the genocide in East Turkistan more effectively, and hit back on the Chinese regime’s efforts to silenceUyghur advocates, as they did by taking my sister as hostage.”

This week at the Geneva Summit, Rushan Abbas called on the UN High Commissioner for Human Rights Michelle Bachelet to release her report on China’s treatment of Uyghurs, an action she must take if her tour of East Turkistan is to have any credibility in the world’s eyes.

Other countries must follow suit and introduce similar policies to tackle transnational repression and the genocidal policies of China. Introducing legislation to fight tyranny is dependent on successful implementation to determine the effectiveness of such actions.