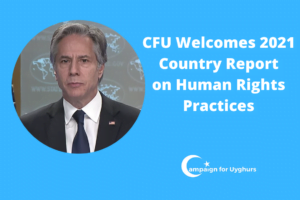 Campaign for Uyghurs (CFU) welcomes the release of the 2021 Country Reports on Human Rights Practices at the Department of State, on April 12, 2022. The 2021 report has been made available to the public online today, the report covers the general human rights situation of 198 countries in accordance with the requirements of US law, and China’s record on human rights is detailed with facts and figures.

Announcing the release of this year’s report, Secretary of State Antony Blinken stressed that human rights protection has always been at the core of U.S. foreign policy, and that protecting human rights and fundamental freedoms has always been a top priority for the United States, he said “There are human rights that everyone, everywhere should enjoy and underscore why these rights are worth defending, that reflects a core principle of human rights, they are universal, people of every nationality, race, gender, disability and are entitled to these rights, no matter what they believe.”

Executive Director Rushan Abbas said today “Uyghurs are really delighted to see this strong stance to call China out for its crimes of genocide, and standing firmly on the values that ought to be advocated by the United States precisely concerning liberty, respect and freedom for the principles of humanity.”

Antony Blinken has strongly condemned the Chinese government’s genocide of Uyghurs, while also condemning atrocities taking place in Hong Kong and Tibet, he said “The Chinese government continues to commit genocide and crimes against humanity in Xinjiang, against predominately Muslim Uyghurs among other groups to erode fundamental freedoms and autonomy in Hong Kong and to carry out systematic repression in Tibet.”

CFU continues to support the actions of the United States government to collaborate with other democracies and concerned leaders to bring justice and hopes to see the ongoing prioritization of ending the Uyghur genocide using all the necessary avenues at hand.