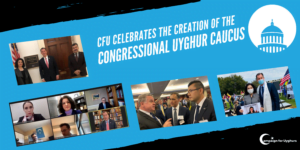 Campaign for Uyghurs (CFU) is proud to recognize the creation of the US Congressional Uyghur Caucus in the United States’ Congress. This newly formed coalition will give new power to voices in Congress who have championed the Uyghur Cause. It is encouraging to see organizing at this level, with real and practical implications for policy moving forward.

The Caucus has been formed at the request of CFU by Representatives Tom Suozzi and Chris Smith. These congressmen have long been allies in the fight for Uyghur justice, especially in regards to stopping the ongoing genocide. This Caucus will allow them to bring in more elected officials who aim to enact policy in support of the Uyghur people. Support within Congress has already helped the Senate pass the Uyghur Forced Labor Prevention Act, and now the Caucus will be able to assure its swift passage in the House of Representatives as well.

“Put simply, we’re talking about the largest coordinated human rights abuse campaign of the 21st century being perpetrated by the Chinese Communist Party,” said Rep. Suozzi. “Not only as Members of Congress, but as human beings we have a responsibility to uphold the values of fundamental human dignity and religious freedom abroad.”

“The ongoing genocide and mass internment of Uyghurs and other predominantly-Muslim ethnic minorities like the Kazakhs are egregious crimes perpetrated by the Chinese Communist Party,” said Rep. Chris Smith (R-NJ). “The United States cannot be silent as Xi Jinping tortures and seeks to eradicate an entire population. In solidarity with the oppressed, the Uyghur Caucus will call attention to the Communist Chinese government’s atrocious human rights violations in the Xinjiang Uyghur Autonomous Region and work to end one of the world’s worst human rights tragedies.”

Truly, the Uyghur Genocide continues to devastate East Turkistan, while more nations come to the conclusion that the atrocity must be addressed. The recent hearing on corporate sponsors for the Olympics is proof that there needs to be even more pressure from governments in the absence of any material effort on the part of corporations to ethically regulate themselves. This Caucus offers the opportunity to do just that. The fight to end this genocide is also a fight for civil liberties and democratic rule. There is no better way to do that than to utilize the very democratic principles we have at our disposal here, in the United States.

Campaign for Uyghurs Executive Director Rushan Abbas said “Day after day, we are faced with new horrors coming out of East Turkistan. These atrocities, this genocide, requires a response that is proportional to its depravity. With this Caucus, we now have a way to organize our allies in the United States, and turn activism into concrete policy actions that address this unspeakable crime. Together, we will see this genocide ended, and those responsible brought to justice.”