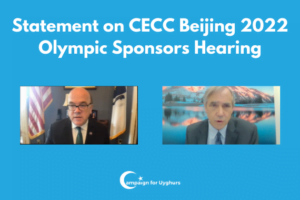 The Congressional-Executive Commission on China held a hearing on Tuesday involving major corporate sponsors of the 2022 Beijing Olympics. These sponsors included Airbnb, Coca-Cola, Visa, Intel, and Proctor and Gamble. Campaign For Uyghurs (CFU) was deeply disappointed by what was said on behalf of these sponsors.

In the words of Senator Jeff Merkley, the hearing was to explore “…how Olympic corporate sponsors can leverage their influence to insist on concrete human rights improvements in China.” Yet, little of this leverage was showcased in the testimony. It was shocking to see how the representatives of corporate America have surrendered their rights to speak against the CCP’s genocidal crimes and instead choose to deliver Beijing’s talking points. Co-Chairman McGovern explicitly asked if the corporate sponsors would be willing to apply pressure to the IOC to relocate the games, or delay them in order to stop the Uyghur genocide. Each of these sponsors, only Steven Rodgers of Intel was able to answer yes. The other sponsors responded in a way that they would respond for the entirety of the hearing, by side-stepping and obfuscating.

The overwhelming consensus in regards to the games was that the corporate sponsors in attendance were fully willing to engage with the Chinese regime if they were allowed to. The sponsors frequently hid behind the concept of “supporting athletes” at the games as a shield to avoid making commitments to human rights. In fact, on multiple occasions the witnesses refused to classify the Atrocities facing the Uyghurs as a genocide.

Campaign for Uyghurs Executive Director Rushan Abbas said in response to this hearing: “It is shameful to witness those company representatives actively choose their profits, their market shares, over their freedom of speech, their consciences, and the lives of Uyghurs in East Turkistan. The entire hearing was clouded by the weight that the Chinese Economy carried over these companies. It was clear from each of their answers that they were unwilling to take any stance on this issue because they fear losing access to their markets in China.”

There was no condemnation of the Uyghur Genocide today, instead there were excuses and non-answers. As such, it appears that major corporate sponsors of the Olympic Games are unwilling to act as significant allies in the fight for human rights in China. It is even more critical that we create and support a grassroots movement that demands these games be boycotted and prevented. The Uyghur people’s lives are more valuable than advertising dollars, despite what the testimony here may often suggest.

CFU recently launched the Berlin-Beijing Olympics campaign to call for a boycott of the Beijing 2022 games in partnership with The Peace Project, Jewish World Watch, and Jewish Movement for Uyghur Freedom. Visit our website for actions you can take, and join our campaign as an organization.