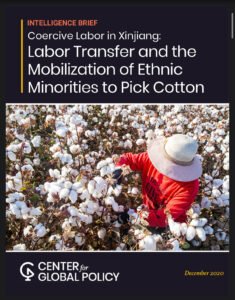 Campaign For Uyghurs (CFU) welcomes the release of another vital report by Dr. Adrian Zenz for the Center for Global Policy on forced labor schemes in East Turkistan.

The implications of these further details concerning the operation of forced labor schemes and the effects on Uyghur and Tibetan populations should be clear. As several U.S. corporations continue to lobby against the Uyghur Forced Labor Prevention Act, it should be perfectly clear that sourcing from the Uyghur region is no longer in any way defensible. With this further confirmation of the scope of atrocities, it will not serve companies to continue with business as usual. CFU also emphasizes that extricating supply chains from the Uyghur region should be considered the bare minimum of a response to the genocide that is actively occurring under the Chinese regime. As the report also affirmed “Many of those shown lining up in front of the labor transfer bus are elderly men and women…” this being due to young people being held in the concentration camps. CFU Executive Director Rushan Abbas emphasized that “The links between this modern-day slavery and the genocide itself cannot be separated. Choosing to fight against legislative efforts to address the atrocities covered in this report is an absolutely despicable thing to do and can be considered direct complicity.”

Campaign For Uyghurs is in wholehearted agreement with the recommendations given in the report that the U.S. government “should put a Withhold Release Order on any product that contains cotton from any part” of the region. As this accounts for approximately 85 percent of all Chinese cotton, this could create an enormous impact if prioritized. Additionally, as suggested, other nations must take similar action. The development of meaningful procedures to monitor supply chains is challenging, but taking on this challenge is not optional. The ethical implications for the entire globe and in particular the garment industry should remind all that the implications of the Chinese regime’s actions and the efforts taken by the international community to address them, stretch beyond the confines of Chinese borders. They are about more than just the Uyghur people. The future for the world is in question at present, and the response to these brutalities must be decisive.

CFU reaffirms our commitment to resist the normalization of slavery in the modern world and to hold the Chinese regime accountable for the genocide and broad crimes against humanity.