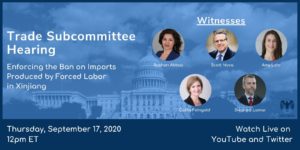 Ms. Abbas opened with powerful testimony regarding her knowledge as a longtime activist and her personal experience with her sister’s detainment in the concentration camps, as well as the discovery of American corporate complicity in Uyghur forced labor.

She asserted to the committee that “Continuing to do business as normal with China today is unimaginable and true American values should not be sold for complicity in genocide. We cannot continue to fund the spread of China’s totalitarian ultra-nationalism to the world.”

Campaign for Uyghurs was pleased to see discussion and opportunity to raise important questions and issues such as whether or not Uyghurs in East Turkistan would be negatively impacted by corporations departure from the region, to which Rushan Abbas stated “This is a paternalistic argument that says Uyghurs lack the ability to do better than slavery in factories. We cannot support institutionalized evils. Freedom is the only real way to live, and for the Uyghurs being able to feed themselves, which is not even guaranteed when they work in these factories, is not the only qualification for a better life. We should be concerned with how we can force the CCP to allow Uyghurs to live as human beings  so that better options for life are available to them.”

Scott Nova, the executive director of Workers Rights Consortium, addressed the problem with audits in the Uyghur region, stating that  “There is no Uyghur worker whose labor is coerced who can possibly feel safe conveying the truth to an auditor.”

Campaign for Uyghurs looks forward to seeing swift action from the Trade Subcommittee and is hopeful that the challenges raised to addressing U.S. complicity in the genocide of the Uyghurs will be dealt with decisively in order to ensure the prioritization of human rights over profit.

The hearing can be viewed here.