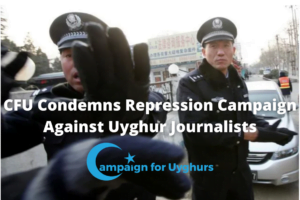 Campaign for Uyghurs (CFU) condemns the repression campaign against Uyghur journalists. An unprecedented wave of arrests of journalists and political commentators in China has taken place since President Xi Jinping took power, ending a decade of experiments with pluralism and debate in Chinese media. A total of 124 journalists are being held in China under conditions that threaten their lives. More than half of all journalists currently imprisoned are from East Turkistan.

China has arrested hundreds of Uyghur intellectuals since 2014, and many have been journalists, as part of a repression campaign launched officially “against terrorism” pretext in East Turkistan. 72 Uyghur journalists, both professional and non-professional, make up more than half of the 124 detainees in China, with 1.4 billion population while Uyghurs’ official population 11-12 million. East Turkistan has been excluded from media coverage in recent years by China, which has led to an information blackout in the region, resulting in most independent reporting coming from outside the region. Foreign journalists who are permitted to travel to East Turkistan remain under close surveillance and are not allowed to travel freely. If they displease Beijing with their reporting, they are prohibited from entering China.

The Chinese regime is also targeting Uyghur journalists outside of its borders. Idris Hasan, a co-founder of “Shebnem”, a publication intended to help Uyghurs integrate into Turkish society, is facing extradition to China from Morocco despite the cancellation by Interpol on 2nd August 2021 of the “red notice” under which he was originally arrested.

Some prominent names include;

Executive Director Rushan Abbas said today “I demand the release of all journalists detained in connection with their reporting.China must stop abducting, detaining, torturing, and harassing journalists and press freedom defenders for freely reporting news and information. I also reiterate my call for Michelle Bachelet to release without further delay the report on grave ongoing human rights violations by Chinese authorities targeting Uyghurs and other Turkic communities in East Turkistan, and to defend the rights of the press, which already exists, at least on paper, within the PRC’s constitution.”