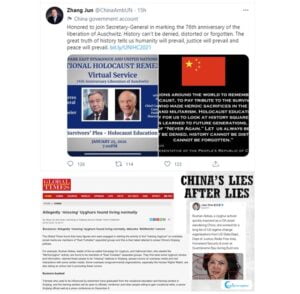 On January 25th, Chinese Ambassador to the United Nations Zhang Jun posted a tweet stating that he was “Honored to join Secretary-General in marking the 76th anniversary of the liberation of Auschwitz. History can’t be denied, distorted, or forgotten. The great truth of history tells us humanity will prevail, justice will prevail and peace will prevail.”

Campaign For Uyghurs (CFU) wholeheartedly agrees with the second half of his remarks but remains disgusted that someone representing a regime that is committing crimes against humanity and active genocide feels empowered to make this type of statement on social media. His participation stands as dishonoring to victims of genocide in light of International Holocaust Remembrance Day on January 27th and should be balanced by a condemnation of China’s genocidal crimes by U.N. Secretary-General Antonio Guterres, which is sadly lacking.

The statement on history reflects a call to the international community to address the Chinese regime and is ironically a complete misrepresentation of China’s actual practices regarding teaching history and distorting the truth.

In light of the continuing problem of genocide denialists spreading lies via social media platforms, including Twitter, Campaign For Uyghurs calls on social media companies to swiftly address the issues that failing to create and enforce consistent policies to protect free speech from attacks by hostile foreign State actors.

Campaign For Uyghurs Executive Director Rushan Abbas stated “I am horrified that these international criminals continue to use our platforms of free speech to spread dehumanizing lies to power their genocidal crimes, while human rights activists face constant attack and libel on these same platforms. I myself, as a U.S. citizen, have had lies published about me in libelous tweets from Chinese Foreign Ministry Spokesman Zhao Lijian, and Chinese state media outlet Global Times. Both of these actors are still active on Twitter and have not faced any consequence for their now provable libel. I am asking Twitter and other social media platforms to do the right thing and cease allowing these hostile, racist criminals from spreading their hate.”

While United States politicians and others can be censored for sharing misinformation, the Chinese State continues to be allowed to share genocide denialism in spite of the U.S. atrocity determination and previous dehumanizing material. It’s time for this to end.