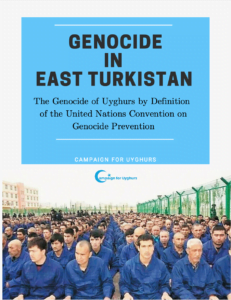 Today, on the eve of the presidential inauguration, the team at Campaign For Uyghurs (CFU) applauds the atrocity determination by the U.S. State Department. CFU is committed to supporting the U.S. administration in its work to seek justice and protect our democratic freedoms.

In a statement, Secretary Pompeo affirmed “I believe this genocide is ongoing, and that we are witnessing the systematic attempt to destroy Uyghurs by the Chinese party-state.”

This important step will complement previous statements by the Biden campaign which also declared the Chinese State’s actions to be genocide, and will allow the incoming administration to continue with strong action, as well as providing a valuable push for other international actors to follow suit.

In response to the monumental news, CFU Executive Director Rushan Abbas stated that “This declaration doesn’t immediately change anything, but as any victim will tell you, having the eyes of the world community see us, and acknowledge that our horror is real, means everything. While the Chinese regime spends its energies attempting to silence all criticism of it’s barbarism, there are those in the world who are fighting the good fight. The truth will triumph, and the Chinese leaders know this. They are trembling. The longer they refuse transparency and do not answer for their crimes, the more guilt they heap upon themselves. We see these barbaric animals for what they are: servants of evil.” She continued that “My own sister’s 20-year prison sentence on false charges is clearly linked to this genocidal intent by the Chinese regime. She, and all Uyghurs, deserve justice.”

CFU remains committed to marching forward for justice. The Chinese regime must be held accountable for its infliction of terror and brutalities against an entire ethnic group. It is also a notable moment to encourage corporations that are doing business in the Uyghur homeland to put a swift end to their own complicity. In the face of such evident evil, the international community must use this declaration of reality to bring about real change and to stop the suffering of millions.

To read more, see CFU’s report from July 2020, “Genocide in East Turkistan”, which was provided as a resource for government officials worldwide to assist in pushing for an atrocity determination.