Thirty-two years ago, students in Beijing stood up and demanded greater accountability from the Chinese authorities. They believed, correctly, that inalienable rights like freedom of speech, of the press, of movement, were critical to the functioning of a free and democratic society. They believed in their principles, in democracy, so fervently, that they were willing to oppose a militarized state in public so the world could see the Chinese State for what it was. Hundreds of them paid the ultimate price for those demands, and revealed the lengths to which the Chinese regime was willing to go to remain unaccountable to its people. Today, Campaign for Uyghurs (CFU) commemorates their sacrifice. 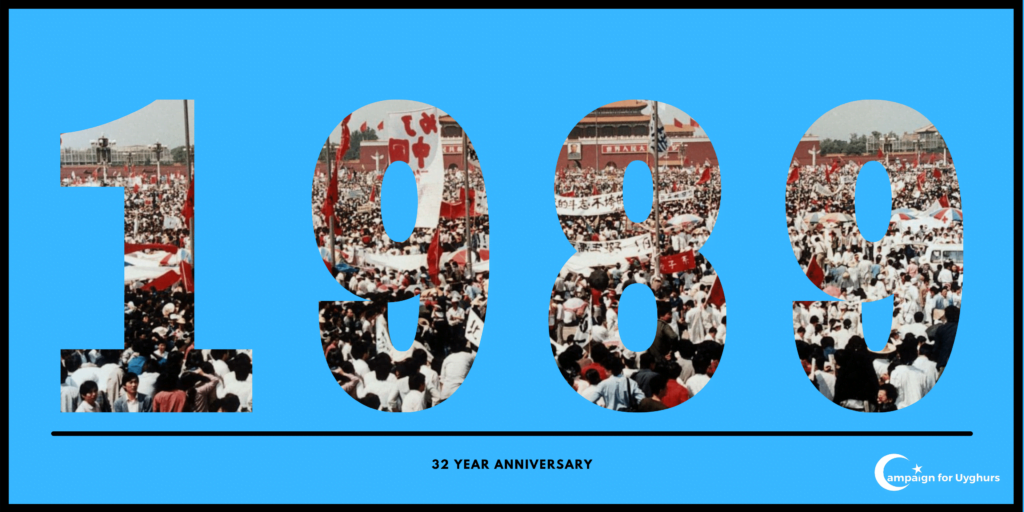 Today, the dream those students held of freedom and democracy has been largely crushed. Instead, Xi Jinping’s autocratic regime is not only conducting genocide against the people of East Turkistan but has also taken further steps to suppress any democratic expression or practice, shaping the politburo as an unstoppable force of continuity that resists any attempt to influence it. Uyghurs, Tibetans, and Southern Mongolians have paid the highest price for this regime’s crimes against humanity, as the expansionist ambitions of President Xi’s government have driven their people from their homes and implemented brutal crackdowns.

Uerkesh Davlet (Wuer Kaixi), Campaign for Uyghurs Honorary Chairman, said “Tiananmen Square serves as a somber reminder of the lengths that the Chinese Communist Party will go to in order to keep their iron grip in place. We must demand transparency, democracy, and freedom within the borders of China and the lands it occupies. If we do not stand up for the rights of these people, we risk making the sacrifices made so many years ago in Tiananmen a movement in vain. The Uyghur genocide is a last wakeup call for the entire world.”

In 1989, young students looked around them at the world and decided it was not enough. Today, we must look around at the new world order that the CCP is creating and ask if that is what we are content to leave for the next generation. Will a world of genocide, slavery and autocracy be what we expect them to inherit? A world that is fearful of reprisal, to the point they would remain silent? It can not, and it must not be.

Campaign for Uyghurs Executive Director Rushan Abbas reflected on the events of the Tiananmen Square Massacre, saying “Student activism is the back-bone of advocacy in many ways. Those brave students who demanded that they be treated with respect and dignity serve as a constant reminder that we must never stop in the pursuit of justice. The memory of the lives lost that day, and the movement they were lost for, informs every decision we make. This regime will not see us as human beings, or treat anyone with the dignity that is their inherent right. It is the world’s responsibility to demand an end to this dehumanization. We must continue to invest in a grassroots movement of solidarity around the world in order to achieve this end not only for the Uyghurs and others suffering under the Chinese regime, but for the future of the entire free world.”

There is a continually growing movement led by Uyghurs, Tibetans, Hong Kongers, and Southern Mongolians, who are demanding the wishes of those students so many years ago be respected. For genocide to end, and for democracy to flourish, we must act. History cannot be ignored, and on today’s anniversary of the massacre of students, Campaign For Uyghurs honors the memory of those who lost their lives and continue to suffer trauma as a result of their sacrifices for the cause of freedom and human dignity. May the memory of this bravery, and the urgency of our task to stop the genocide presently unfolding, spur us onward.