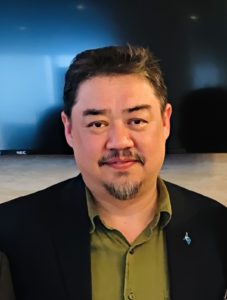 In April 1989, as a student at the Beijing Normal University, Mr. Davlet was instrumental in initiating a Beijing student movement for democracy and freedom that galvanized the world. One of the most influential student leaders, he maintained a leading role throughout what became known as the Tiananmen Student Movement, and which ended when it was brutally suppressed by the Chinese government on June 4th.  His impassioned meeting with Chinese Premier Li Peng before the crackdown was watched on televisions throughout China and the world, making Mr. Davlet a household name in China and a representative student leader internationally.

After the June 4th massacre, Mr. Davlet was listed No 2 on China’s list of 21 most wanted student leaders. With the help of sympathizers in China and Hong Kong, he escaped from China via Hong Kong to France, where he was given asylum. In Paris, Mr. Davlet and his colleagues in exile founded the Federation for a Democratic China (FDC), of which he was elected vice president.  After escaping from China, he lived in France, the United States, and Taiwan where he remains his residence today, where he continues his endeavor for the same cause.

In the year 2009, after 20 years from the massacre, he is still the second most wanted person in China for his role at Tiananmen. On June 3rd, Mr. Davlet arrived in Macao on transit to mainland China intending to surrender and confront Chinese authority in court. In his declaration, he stated that “A dialogue is what the student in Tiananmen square has called for and still waiting to happen, and I call it again, and willing to enter it with Chinese authority even if it has to be in the court of the regime.” The Macao authorities refused his entry and had him deported to Taiwan.

On June 4th, 2010, Mr. Davlet has made another attempt to go back to China through Japan, and when that has failed, he tried to force himself into the Chinese embassy in Tokyo, one more time, to turn himself into the regime, he was arrested by the Japanese authority and released two days after without charges.

Two more attempts of surrender were made in the following years in Washington DC and Hong Kong with the same result, being rejected by the Chinese authority.

In November 2020, Mr. Davlet was appointed as the Executive Deputy General Secretary for the Taiwan Parliamentary Human Rights Commission.

Mr. Davlet is an active member of the international and Taiwan civil society.  He now serves as chairman of the Taiwan Association for Democracy in China. He also sits in Emeritus Board at the Reporters Without Borders (RSF) and serves as vice president for RSF’s advisory board, Honorary Chairman to the US-based Human Rights advocacy organizations, Campaign for Uyghur. Honorary President to the German-Based Uyghur cause organization, Ilham Tohti Institute.

Mr. Davlet Hosted radio and TV talk shows in Taiwan. His column and regular appearance in the political analytical program have made him an opinion leader in the country.

Mr. Davlet published his book: Submit for Freedom, in Chinese, in 2013.

Chairman of the board

Chairman of the Board

Chairman of the Youth Committee