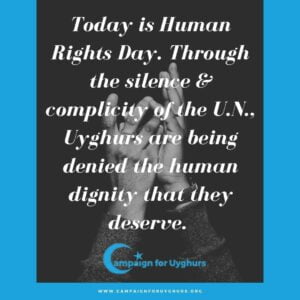 Today, on Human Rights Day, Campaign For Uyghurs (CFU) was honored to host a web panel in honor of the upcoming anniversary of the forced disappearance of renowned Uyghur scholar Rahile Dawut, who vanished three years ago and was confirmed one year after her disappearance to be in the custody of the Chinese regime. Akida Pulat, the daughter of Rahile Dawut remarked during the panel that “It is a genocide to me, who is not able to see my mother.” “It changed my life totally.” continuing that “If you have an excellent parent, you know that your mother is the only person that you can bother at any time if you want to talk. And I am not the only one who lost this kind of connection.”

Cases like that of Rahile Dawut are a stark reminder of the realities of Uyghur human rights under the regime, and the proof of genocide. If intellectuals like her, peaceful doctors like Gulshan Abbas, and millions of other loved ones like Suriye Tursun can be thrown into concentration camps and used as slaves, there is nothing that the regime will stop at in its quest to erase the Uyghur ethnic identity from the earth.

This week saw some positive steps by multiple bodies that will provide precedent to address the genocide of Uyghurs and other horrific human rights abuses perpetrated by the Chinese Communist Party. These include the Urgency Resolution in European Parliament put forth by MEP Engin Eroglu, which will be voted on next week.

We also recognize the sad reality that the United Nations, the very international organization that initiated human rights day, has been turned into a sick joke and, in reality, a perpetrator through complicity with the Chinese regime. We call for tangible action on the part of the United Nations to hold China accountable and to stop the genocide.

Uyghurs, and the world, cannot afford to wait any longer. The years that have passed have resulted in too high of a human cost.

View the panel: “Still Searching: 3 Years Since the Disappearance of Rahile Dawut”