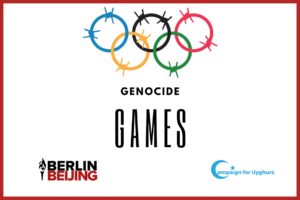 With a little over weeks until the beginning of the Beijing Olympics, it has become clear that the games will occur in China. It has become more important than ever to make sure that the brands that willingly sponsor these games are called out and held accountable for their complicity in this genocide.

Executive Director of CFU Rushan Abbas said “It has become unavoidably apparent that the Uyghur genocide in China is the eminent crisis of this moment. The decision by the IOC to press forward with the Olympic Gamesin Beijing represents a callous disregard not only for the rights of Uyghurs, but for human rights all over the world. Though they have decided to be complicit in genocide, sponsors of the games still have time to stand on the correct side of history. Athletes also have this choice, and I urge everyone to search their hearts for what is most important. Is it these games? Or humanity?”

The Peace Project continues to organize on the issue, and wrote recently that “This January, we are launching an influencer marketing campaign and coordinating a posting campaign with 40 human rights organizations to target the Olympics Sponsors: Coca-Cola, AirBnB, as well as Procter and Gamble.” The Peace Project and Jewish World Watch, together with Campaign for Uyghurs (CFU), have launched petitions calling for sponsors of the games to withhold their sponsorship, rather than become complicit in the ongoing Uyghur genocide.

Turnisa Matsidik-Qira, Deputy Director of CFU has been organizing weekly protests against the Beijing Olympics since October 18, 2020. Today she said: “I ​am protesting alone or with my family weekly, and sometimes daily for more than a year now, calling on the International community not to allow China to use the 2022 Olympics to “sportswash” ​their genocidal ​crimes against humanity​. I shall continue to ask the world to act with humanity and boycott the Olympics”.

As part of an ongoing advocacy effort, CFU has also encouraged athletes to speak out in defense of the Uyghur people, and withhold their talents from these games. Their platform is invaluable, and it must be used at this moment to defend Uyghur rights, and human rights around the world. With the games happening in such a short time, there can be no delay in deciding which side of history each person will find themselves on. CFU encourages all people to sign the petition, demand corporate accountability, and refuse to watch these genocide games.

Even with the growing international attention on the Uyghur genocide from governments and human rights organizations, businesses continue to flout their indifference. Just today, the CEO of Social Capital and owner of the Golden State Warriors Chamath Palihapitiya claimed he did not care about the Uyghur genocide. This kind of attitude only serves to allow authoritarian regimes to continue their abuses and in China’s case, to continue a genocide, without accountability. History is calling on all of us today to act. Let us answer that call by boycotting these games, whether it be by withholding competition, sponsorship, or viewership, on February 4th, 2022!
Go to berlinbeijingolympics.com/action to sign the petition!