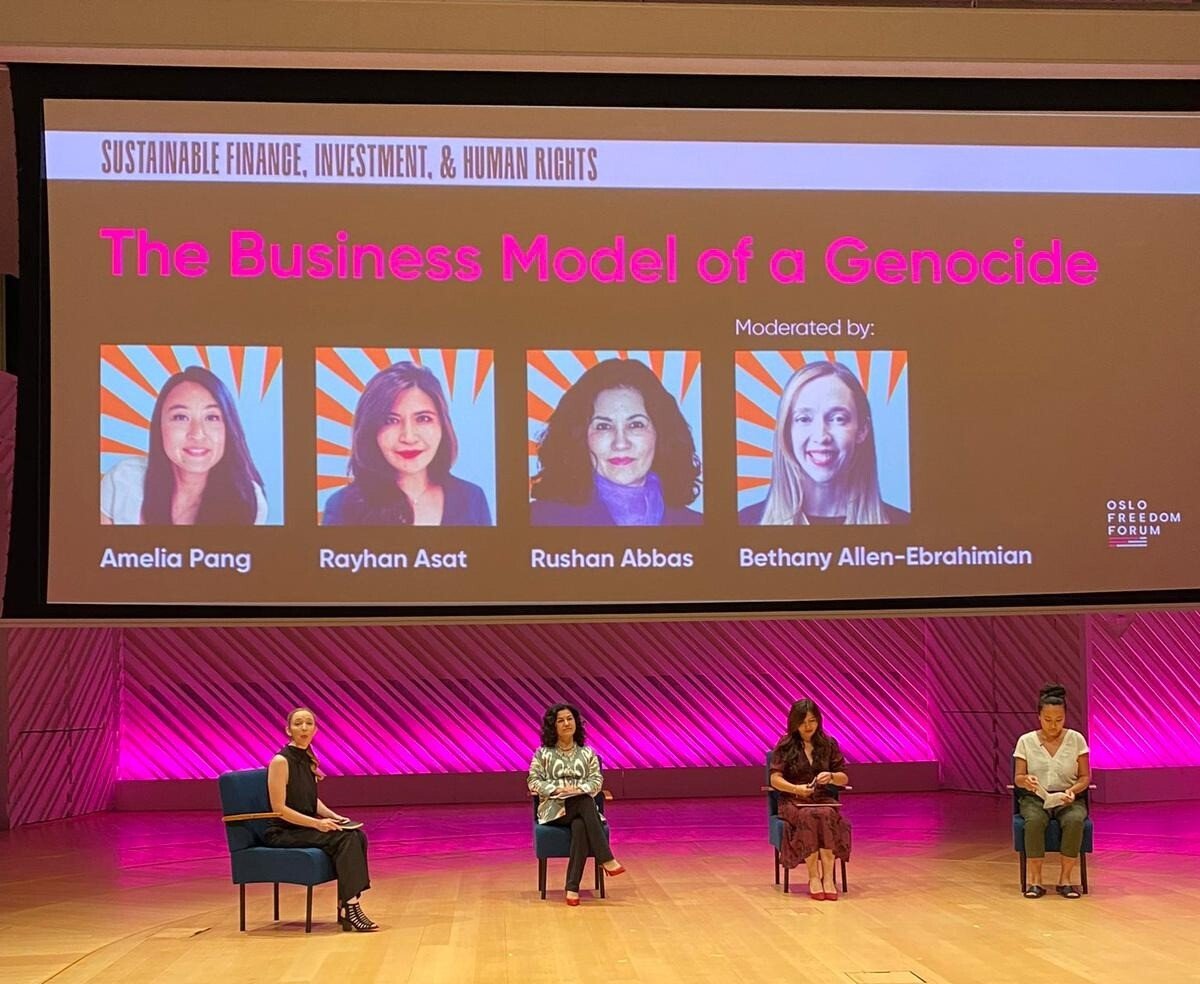 Campaign For Uyghurs (CFU) attended the Oslo Freedom Forum in Miami, Florida from October 4-5, 2021. The forum showcases human rights, and those that fight for them, on a global stage. This year was an excellent cross-section of the global effort to build a stronger international community that defends the rights of all people. The Uyghur cause, and the genocide being faced in East Turkistan, were both at the forefront of the discussion.

CFU Board Member Akida Pulat shared as a main stage speaker this year. She said “activism is a long journey. Because of my activism, I cannot return to my homeland. But, I am luckier than all the Uyghurs currently suffering in camps and prisons. The world must take action! In the past, we said never again. Now, we are letting a genocide happen again. Governments and human rights organizations must take immediate action to protect Uyghurs.”

CFU was also delighted to watch as artist Badiucao from Australia received the Vaclav Havel Prize for Creative Dissent in recognition of his work to highlight the crimes of the Chinese Communist Party. Oslo also featured new work which he brought to display, offering: “I want to present this new body of work. Five posters against the Beijing Olympics next year. Here, you will see all the crimes against humanity from the Chinese government. From the total surveillance on its own citizens, to the covid virus spreading to the world because of censorship. What has been done to the Tibetan community, the Hong Kong community, and the Uyghur community. I want to share this work with you, and I want everyone to own the image…so you can share it with your family and your community. That is how we make a difference.”

CFU Executive Director Rushan Abbas spoke on the panel “The Business Model of a Genocide”, moderated by journalist Bethany Allen-Ebrahimian, the China reporter at Axios whose work helped to expose the realities of the Uyghur genocide. Ms. Abbas remarked that “If we cannot commit to address slavery and active genocide at the hands of the Chinese regime, we will find that we have no ground to stand on in defending human dignity from any further assaults.” She also reminded the audience of another aspect of forced labor, stating that  “Uyghur women are suffering the complete loss as their bodies are the battleground on this genocide. This modern slavery is also functioning as a mechanism of social control. Women of childbearing age are held in an environment where they are controlled and monitored.”

After concluding this time with human rights defenders from across the globe, CFU was heartened to see that the Uyghur genocide was discussed prominently at this year’s event. The solidarity from the international network of human rights defenders provided hope and CFU looks forward to seeing the continuing tangible actions to defend human dignity from the attacks of the CCP together.