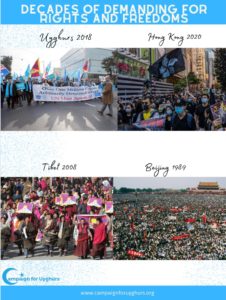 CFU Press Release
For Immediate Release
June 3, 2020, 1:00 PM EST
Contact: contact@campaignforuyghurs.org
www.campaignforuyghurs.org
As we mark the anniversary of the 1989 Tiananmen Square massacre, we recall the effect that this event has had. Today’s China was indeed shaped by this bloodshed, as was the world. And even now as Hong Kong suffers similarly, as millions of Uyghurs are in concentration camps, as Tibetans are denied their rights, the Chinese government continues to deny this crucial history and deny brave citizens their honor.

The crushing reality of how deeply trust in any hope for Chinese government reform was lost by the young people who stood up for the right action has only continued to be proven eternally hopeless by the increasing suppression and oppression carried out by China as a global dictator. Rather than listening to the cries of their people, China has only served them distractions, dangling openness with the West as a sign of reform while continuing to hide the truth about the Chinese Communist Party’s past, as well as the truth of the perverted sickness that still plagues the system.

The Chinese government would like to believe, in fact, that these protestors were consumed and confined, but the effects of their bravery have withstood the test of time and we are grateful to be able to look to their example as we face the monster that has arisen today. Campaign for Uyghurs Executive Director Rushan Abbas stated, “China’s omnipresent despotism is a reminder that the message of the Tiananmen protests is just as relevant today.”

We may feel that we are standing alone as the world sells its soul for Chinese blood money and ignores the cries of Tibetans, Mongolians, Uyghurs, and Hongkongers. We bemoan the deliberate ignorance of western countries and their complicity in crimes against humanity. But this pessimistic view is not the whole truth. We are not alone and have never been, as the heroes of Tiananmen continue to prove by their voices.

Legislation such as the Uyghur Human Rights Policy Act that is now on the President’s desk, is a sign of hope. An imperfect country still stands as a shining light because of ordinary people, people that would be crushed under the government system in China.

While the Chinese government rejoices in any hint of a perceived flaw in other parts of the world as an opportunity to try to excuse their guilt, they will never understand something that we know: protests and the imperfect efforts of citizens to stand up to CCP tyranny and oppression cannot be compared to what is seen in democratic countries. The ability to self-criticize is essential to continued growth and true development and should be available for all.

The Chinese Communist Party and its foolish, deceptive, twisted rhetoric of totalitarian control will fail. To the Chinese government leaders who desperately strike down friends as foes,  and condemn true patriots as enemies of the state: we encourage you to reform before you bring greater shame to China in the annals of history.