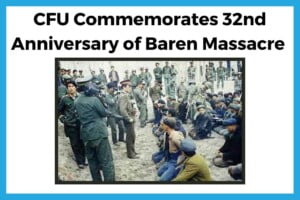 Today, Campaign for Uyghurs (CFU) remembers those protesters who were brutally massacred by the Chinese regime in Baren, a township in East Turkistan’s Akto county, near Kashgar, which had seen thousands martyred on April 5, 1990. This year, we commemorate the 32nd anniversary of this bloodshed by the PRC and pay tribute to those who lost their lives standing for the freedom and justice that Uyghurs and other Turkic peoples have been denied during the decades of oppressive brutality under Chinese Communist Party rule which still continues today.

The bloody massacre on April 5, 1990 is yet another example of the CCP’s suppressive, brutal tactics to silence dissent. During the short history of the CCP, the rightful demands of the Uyghur people have not only been ignored, but have lost their lives for daring to raise their voices.

As part of China’s cruel One Child Policy, Uyghur women would be routinely forced in their millions to abort their babies. Villagers, directed by Zeydin Yusup, protested at the Chinese government’s oppressive policies. The People’s Liberation Army (PLA) violently suppressed the protest. The Uyghurs were subject to China’s heavily armed military and so thousands were brutally massacred. Following the protest, the Chinese regime arrested over 7,000 people, sentencing many of them to long prison sentences and executing others.

Marking this tragic day, Executive Director Rushan Abbas said “The memory of these innocent people, who sacrificed their lives for what they knew to be right, encourages our entire community around the world to continue to fight for the rights of Uyghurs and other Turkic groups. We remember that justice is something we must all strive for, even as the Chinese regime seeks to exterminate us. These horrific events gives us a wake-up call to strengthen our commitment to stopping this genocide.”

As the Chinese regime seeks destruction through the Uyghur genocide and crimes against humanity, we call on the international community to demand justice, not only for the innocent blood spilt by a regime that will stop at nothing to impose its brutal and corrupt ways on all peoples, but to defend the future of this free world.