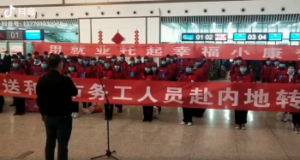 BEIJING —  The online ad boasted of freshly trained ethnic minority teenagers as if they were commodities for sale. Factories could book workers online at a “minimum order of 100″ people, the ad said, and have them delivered to their doorsteps within 15 days.

The ad was included in a report released this week by the Australian Strategic Policy Institute, or ASPI, which advises the Australian government, alleging that Muslim-minority Uighurs have been sent from “reeducation” camps in China’s Xinjiang province to factories across China, where they are forced to make consumer goods for the world.